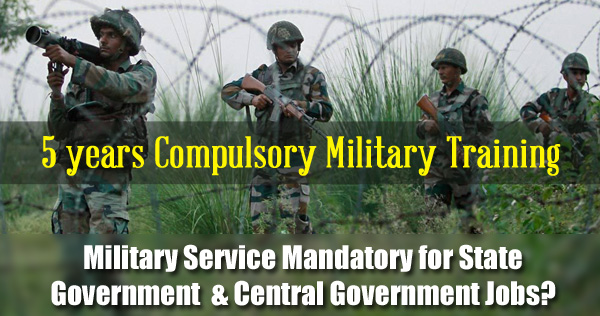 Compulsory Military Training
Aspirants for the state and central government jobs should henceforth serve five years in the military. A proposal to this effect was made by the Parliamentary Standing Committee.
More than 20 countries around the world, including North Korea and Russia, have compulsory military service for all its citizens. Some of these countries have compulsory military service for women too. They insist on this training because they believe that, in addition to instilling a sense of patriotism in its citizens, military training also teaches them discipline and good values.
The Parliamentary Standing Committee has pointed out that there is a shortage of about 7,000 officers and about 20,000 soldiers in the Indian Army. The Indian Air Force is short of 150 officers and 15,000 soldiers; and the Navy is running short of 150 officers and 15,000 lower ranked personnel. The Parliamentary Standing Committee has suggested ways to reduce this growing shortage.
The Parliamentary Standing Committee, under the leadership of Retired Army Major General KC Khanduri, submitted its report on defence. The committee has recommended that a five-year military service be made mandatory for those who are seeking government jobs. The committee believes that the measure would reduce the shortage of human resource in armed forces.
The central institutes that design and implement the various training programmes for government employees could look into it, the committee said. According to statistics, more than 30 lakh people are employed in various central government offices, and more than 2 crore people are employed in the various state government agencies throughout the country.
Central Minister Arun Jaitley had, in July 2014, clarified that the government was not supporting the implementation of compulsory military service in India. But, he also informed that the number of recruits in the National Cadet Crop is increasing.

5 Income Tax Changes Which Will Come Into Effect From April 1, 2018

Filling up of posts of Instructors at Postal Training Centre Mysuru

Cost Consultants Engagement in DoP – How to Apply