Prohibition on bringing any political or outside influence by Govt. servant or by their close relatives

Prohibition on bringing any political or outside influence by Govt. servant or by their close relatives 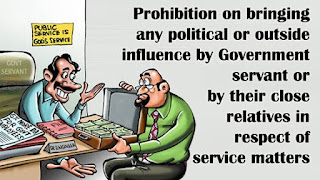 ToThe PCsDA/CsDAThe PIFAs/IFAs(Through website)Subject: Prohibition on bringing any political or outside influence by Govt. servant or by their close relatives in respect of service matters.Reference: This HQrs letter bearing No. even dated 30.05.2017.

Please refer to the communication cited under reference containing guidelines regarding representation from Government servants on service matters. As per existing instructions, wherever, in any matter connected with his service rights or conditions, a Government servant wishes to press a claim or to seek redressal of a grievance, the proper course for him is to address his immediate official superior, or Head of his office, or such other authority at the appropriate level who is competent to deal with the matter in the organization.
2. However, it has been observed that instances of bringing outside as well as political influence by the official and their close relatives in matters like transfer etc. are on the rise. Such trend has been viewed seriously and the officials concerned may be liable for disciplinary action for such transgression and violation of provisions of CCS (Conduct) Rules, 1964.
3. In this context, attention is also invited to DOP&T OM bearing F.No.11013/08/2013-Est(A-111) dated 31.08.2015.

4. The contents of this communication may be disseminated to all officers/ staff serving in your organization.