Implementation of reservation in promotion for employees

Implementation of reservation in promotion for employees
GOVERNMENT OF INDIA
MINISTRY OF PERSONNEL,PUBLIC GRIEVANCES AND PENSIONS
RAJYA SABHA
UNSTARRED QUESTION NO-1067
ANSWERED ON-26.07.2018

Implementation of reservation in promotion for employees

1067 . Smt. Vijila Sathyananth
(a) whether it is a fact that Government has asked all its departments and the State Governments to implement reservation in promotion for employees belonging to Scheduled Castes and Scheduled Tribes categories;
(b) if so, the details thereof;
(c) whether it is also a fact that the move comes following a recent verdict by the Supreme Court in this regard; and
(d) if so, the details thereof?
ANSWER
MINISTER OF STATE IN THE MINISTRY OF PERSONNEL, PUBLIC GRIEVANCES AND PENSIONS AND MINISTER OF STATE IN THE PRIME MINISTER’S OFFICE
(DR. JITENDRA SINGH)
(a) to (d): The Supreme Court in Special Leave Petition (Civil) No.30621/2011 has passed the following order on 17.5.2018:-
“It is directed that the pendency of this Special Leave Petition shall not stand in the way of Union of India taking steps for the purpose of promotion from ‘reserved to reserved’ and ‘unreserved to unreserved’ and also in the matter of promotion on merits..”.
Further, in the matter related to Special Leave Petition (Civil) No.31288/2017 connected to Special Leave to Appeal (Civil) No.28306/2017, the Supreme Court held as under on 05.06.2018:-
“Heard learned counsel for the parties, Learned ASG has referred to order dated 17.05.2018 in SLP(C) No.30621/2011. It is made clear that the Union of India is not debarred from making promotions in accordance with law, subject to further orders, pending further consideration of the matter. Tag to SLP (C) No.30621 of 2011.”
Based on interim Orders/directions of the Supreme Court dated 17.05.2018 and 05.6.2018, Department of Personnel and Training vide Office Memorandum No. 36012/11/2016- Estt.(Res-I) {Pt-II} dated 15.06.2018 requested all the Ministries/Departments of the Government of India to carry out promotions in accordance with above directions of the Supreme Court on existing seniority / select lists subject to further orders which may be passed by the Supreme Court. The State Governments were advised to take necessary action in accordance with the above-mentioned orders passed by the Supreme Court.
******* 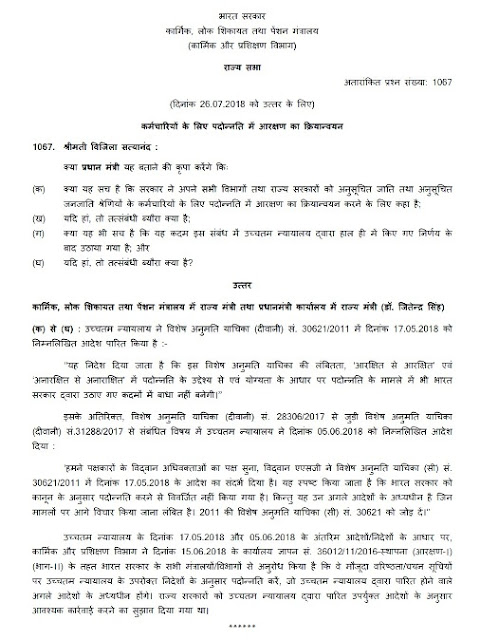 By when the benefit of reservation provided to Scheduled Tribes would come to an end?