Tribute to Comrade M.Krishnan, a powerful-fighting leader in the Indian trade union movement

Tribute to Comrade M.Krishnan, a powerful-fighting leader in the  Indian  trade union movement

With the passing away of Comrade M Krishnan, Indian Trade Union movement for the central staff had lost its sheen. It missed one of its leaders with powerful-fighting fervour. 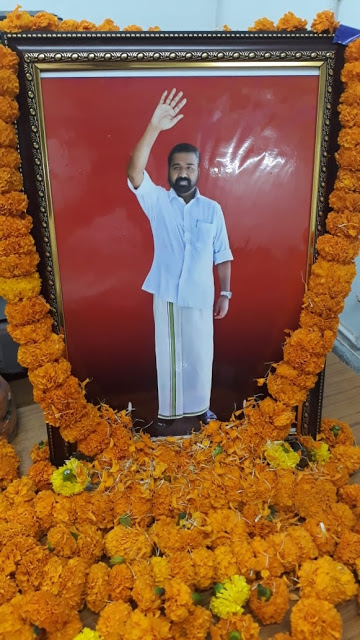 Com C Chandran Pillai was the Secretary General of NFPE when its Golden Jubilee Celebrations were organised in the Federal Council of NFPE held at Thiruvananthapuram during November 2004. At that time, Com M Krishnan was the Circle Secretary of AIPEU-III union of Kerala. He was the head of reception committee to conduct that Federal Council. It was the first time I met him there. I was overwhelmed with much enthusiasm to observe his skill in planning the meet in a meticulous way. I also saw   his amazing leadership quality in organising such a mega trade-union event without even a small hitch. His election as General Secretary of AIPEU Class III union affiliated with NFPE, the mighty organisation in the Postal and RMS wing, did not surprise me as I had already observed a powerful leader in him   He rose to that level with his sheer hard, sincere and dedicated work in the union. He was a leader reputed for his aggressiveness while fighting against the anti-worker policies of the Government.

Inimitable style of functioning in NFPE

Then he was elected as Secretary General of NFPE (National Federation of Postal Employees) in the 8th Federal Council held at New Delhi during June 2010. He led the postal movement in his own inimitable style and held high the image and prestige of NFPE. He led many successful struggles   to solve the pressing problems of the employees who reeled under innumerable untold difficulties and sufferings during the transition period inching forward to total computerisation in the department.

Growing popularity of Confederation under his Leadership

He was elected to the post of Secretary General, Confederation of Central Government Employees and Workers, a stronger movement uniting many of the unions and federations of central staff, in its National Conference held during May 2013 at Kolkata. With his becoming Secretary General of CCGE&W, the NFPE leadership had got its chance to lead the entire central Government trade unions nearly after 4 decades. He indeed used this opportunity to prove his mettle. Under his leadership,   the Confederation gained prestige and growing popularity among the Central Government Employees. He successfully organised many strikes against the Central Government’s policies unleashing onslaughts upon the Indian working class.

Posts no ornaments to him

When he retired from service on Superannuation on 31st August 2014, he held many prestigious posts. He was Secretary General of NFPE and the Confederation. He was General Secretary of AIPEU-III, Leader of JCM (Postal Departmental) Council and Member JCM National Council .Posts are not ornaments to him. He did every possible strenuous efforts to use all the posts he held to serve the cause of the central staff in general and postal staff in particular. Even after his retirement he continued as Secretary General of the Confederation up to February 2020 and rendered his service to  the central Government employees.

Gave hope to the Gazetted Officers

While I was working in New Delhi , we conducted a  Dharna in Jantar Mantar , a historical event first of its kind for entirety of Gazetted officers Community , on 25.02.2016 with 27-point charter of demands under the banner of  “Confederation of Central Government Gazetted Officers Organisations” (CCGGOO) , an Apex Level  organization unifying  all the  Central Government Gazetted Officers Associations. It was arranged under active leadership of Comrade S.Mohan, Chennai who was the Secretary General of the CCGGOO. Com Krishnan inaugurated the Dharna and extended his fraternal support to the CCGGOO. He spoke at length emphasizing the need for unity among the employees and officers to fight against the anti-labour policies of the Government. His oratory skills were at the best on that day. His speech inspired the officers who attended the Dharna . It gave new confidence and new hope among the Gazetted officers that they will gain enormous strength in the days to come to face the challenges along with the CCGE&W.

His death at the age of 66 is untimely and it is a great loss not only to the Postal but also to entire central Government Trade union movement. His sacrifice will not go in vain. He becomes an inspiring role model to the budding leaders of the trade unions.

Red salute to the departed leader

Let us march ahead and fight tooth and nail against the anti-labour policies of the BJP-led NDA Government at the centre and thus follow his footprints to fulfil his desires. Red salute to the departed leader.