All about DO Letter – Format, Example and How to Write

The DO letter full form is Demi Official Letter. DO is the short form of Demi Official letter. It is a letter which is written by the senior officers of state and central government to others in DO letter format.

DO letter means an official letter after many reminders to get a work expedited. It is typed on a special plain paper called letter pad which contains name and address of the Ministry/Department printed on the top right corner. A Government emblem is also embossed in gold on the right top corner.

What is the actual DO letter Format?

DO letter is written in a prescribed format called DO letter format. Here I will tell you all the information regarding official letter format.
As we already know that it is written on the letter pad. In the beginning, the writing officer writes a name like “My Dear ……….”. In case, the addressee is a senior officer, he will be addressed as Sir.
The actual matter will be written in the body of the D.O. letter in simple language with effectiveness.
In the last, the writing officer writes as ‘Yours Faithfully’, the D.O. letter ends with ‘Yours Sincerely’. It is also written to Members of Parliament, Ministers, Members of State Legislatures for furnishing the information asked by them. D.O. letters end with ‘My best regards’, ‘Happy New Year / Diwali’ etc.
It has got a personal experience to the official work. The writing officer writes a word ‘with regards’ at the conclusion of the letter in his own handwriting by the officer signing it.

How to write DO letter?

DO letter writes in both languages (do letter in Hindi and do letter in English) To write a D.O. letter, requires skills and command of the language as the facts of the whole case are not mentioned in this form of a letter in chronological order. It also required clarity on the issues involved and brevity of sentences, so as not to leave any important aspect of the matter as the purpose of writing a D.O. letter is that the addressee, generally Minister/senior officers, should be apprised of the issues involved without wasting their precious time.

We already talked in the above para on DO letter format pdf and writing of a DO letter.One of the best D.O. letter examples is “DO letter format in Indian army“. You can check it from the below image. 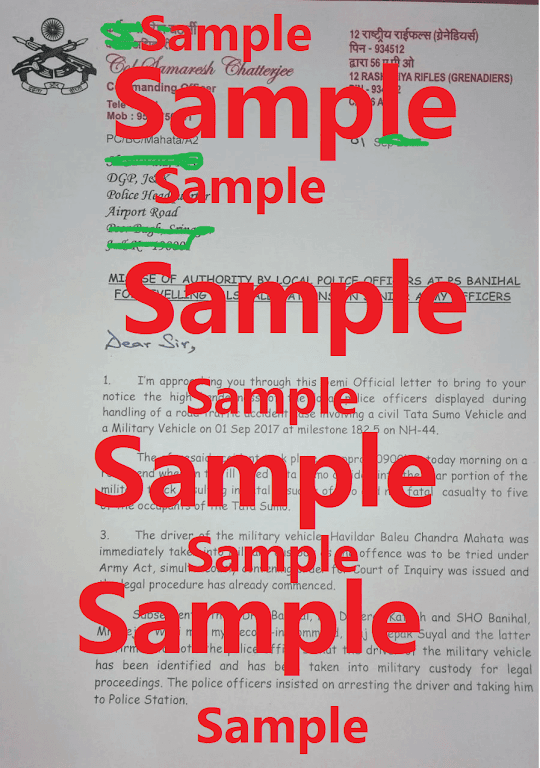 All Postal Online Exam – Join and Check your Preparation.