ROYAL MAIL : Postman delivers ‘somewhere in Sheffield’ parcel.
A parcel addressed to “somewhere in Sheffield” was delivered to its rightful recipient after the postman turned detective.
David Easson’s friend sent him a parcel of chocolate bars from Sweden in a package marked “vital survival stuff”.
Rather than ask for the address, sender Marten Wedebrand instead wrote all he knew about Mr Easson on the package.
Postman Darrell Gilmour used the information to find him on social media and sent him a Facebook message.
Mr Easson said it had been a “great bit of detective work” by Mr Gilmour.
More from Yorkshire
The freelance sports reporter said: “Marten Wedebrand is an old acquaintance [who] first started listening to me on radio a long while back.
“He really could’ve just asked for my address. Instead he put a rather garbled CV of mine on an envelope.”
Mr Wedebrand wrote all the information he knew about Mr Easson on the parcel, including his wife’s name, previous jobs and that “they have a child, or dog, or both”.
Mr Gilmour managed to use the information to track him down.
“I got this message from Darrell Gilmour in the middle of the night on Monday,” Mr Easson explained.
“At this time there’s so much pressure on them, so to find me like this, I really didn’t mind the 3.35am Facebook message. Great bit of detective work.”
The package contained six packets of Kvikk Lunsj, a chocolate bar similar to a Kit Kat.
“I had these in Norway when I was working at the Youth Olympics in 2012 and I’ve hankered after them ever since,” said Mr Easson. 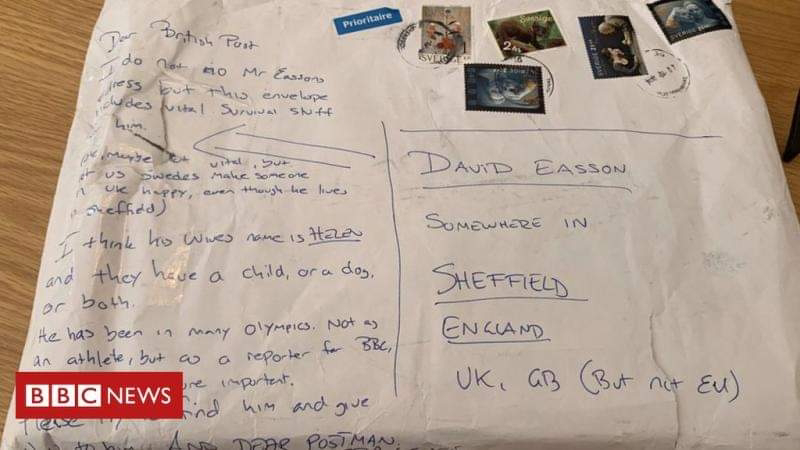 Lockdown impact: Over 650,000 workers dig into EPF as incomes dry up