As you know, as per the earlier practice, the Postman/Post women, Mailguards and MTSs working in Department of Post were being provided cloths for stitching their uniforms and the cloths were being procured in bulk by the PSDs of the respective Circle/Divisions. However, 7th CPC had recommended to subsume the Washing allowance and supply of cloth along with stitching charges as ‘Dress Allowance’ and the rate was fixed as Rs.5000/- per year. Accordingly, the Dress Allowance of Rs.5000/- per year for Postmen / Women, Mail guards and MTSs working in Department of Posts is being paid to them in the month of July every year. Further, the Department has redesigned the uniform for Postmen ( both male and female) and MTS cadre in consultation with National Institute of Fashion Technology, Delhi(NIFT) and the employees have been instructed to procure the uniform on their own from the market out of the amount being paid to them as Dress Allowance. As such, the cloths already procured by the PSDs. Now, It has been observed that certain Circle have been used those old stock cloths, earlier procured for stitching of uniforms and no have become surplus due to re-designing of uniform and change in procuring/purchase system of uniform, for preparation of ‘face mask’ as preventive measure to contain the spread of COVID19.
Read Also
Uncategorized 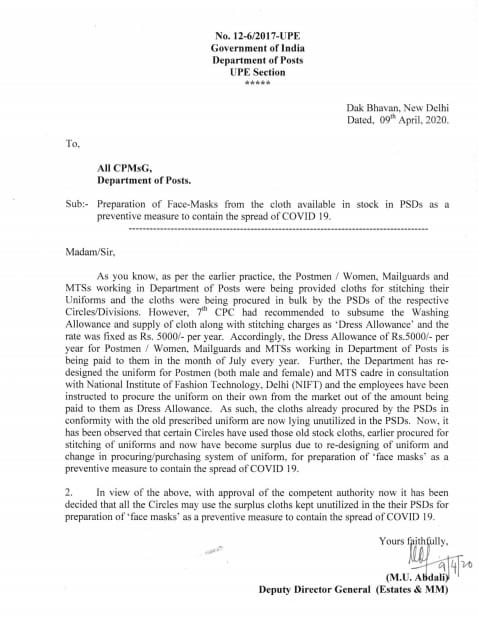 Permission of Partial withdrawal from NPS for treatment of COVID19.

Request to draw the Salary to all the staff for the period of lockdown.