Heads of Circles so far failed to follow the guidelines issued by the DOPT and the advisory of the MOH.: NAPE Letter to Directorate 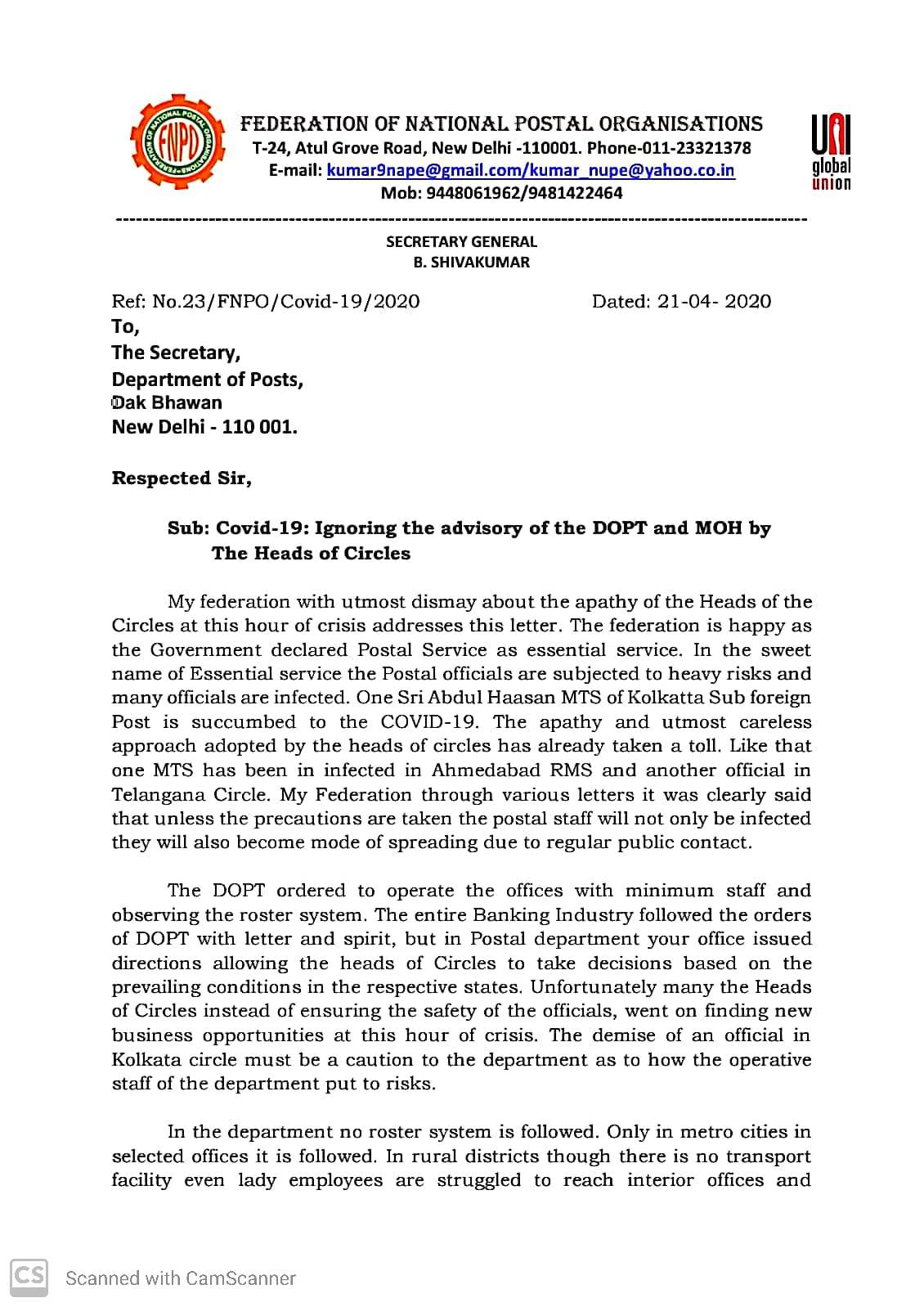 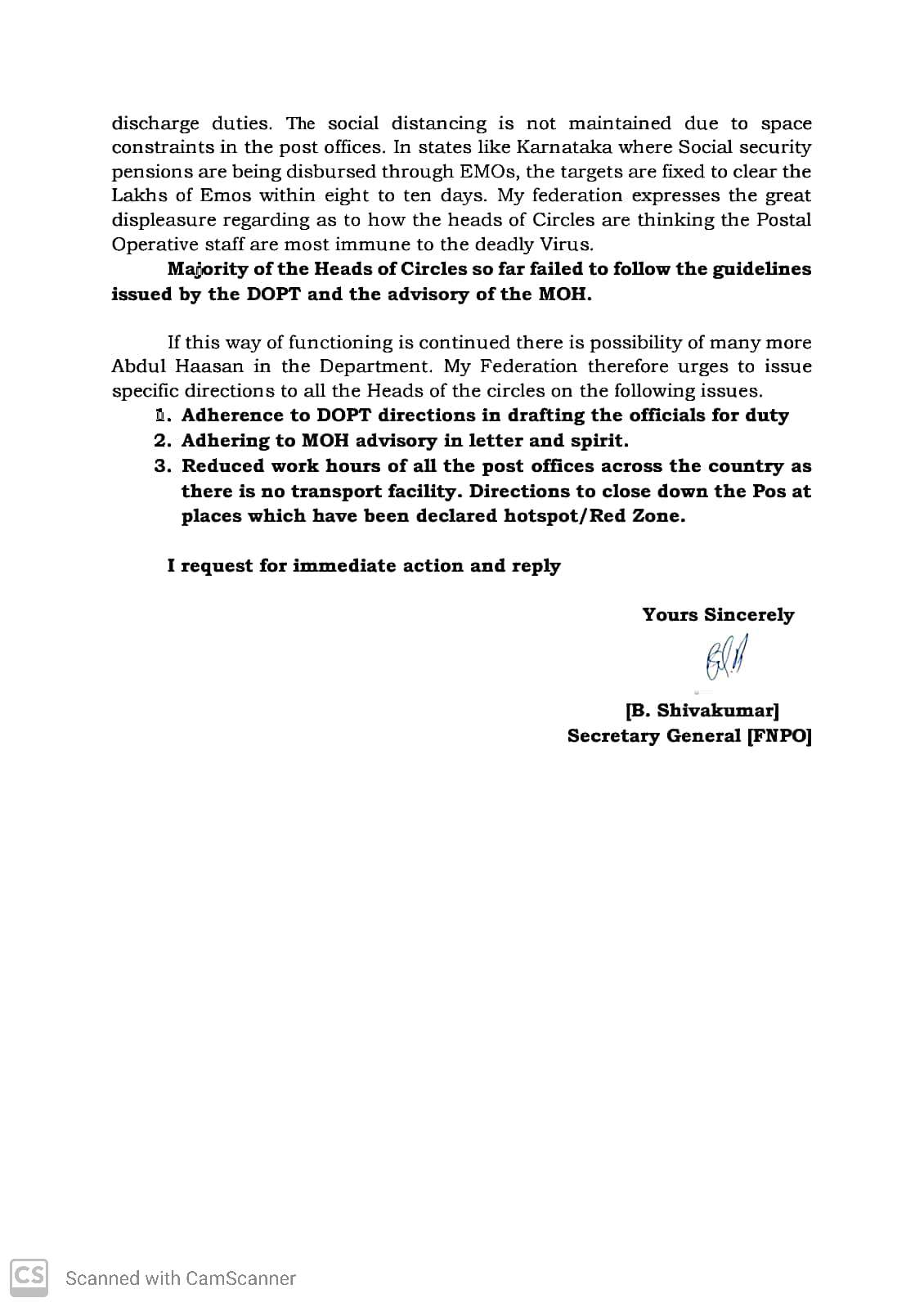 To,
The Secretary
The Department of posts
Dakbhavan New delhi-
Respected Sir,
Sub: Covid-19 : Ignoring the advisory of the DOPT and MOH by the heads of Circles
My federation with utmost dismay about the apathy of the Heads of the Circles at this hour of crisis addresses this letter. The federation is happy as the Government declared Postal Service as essential service. In the sweet name of Essential service the Postal officials are subjected to heavy risks and many officials are infected. One Sri Abdul Haasan MTS of Kolkatta Sub foreign Post is succumbed to the COVID-19. The apathy and utmost careless approach adopted by the heads of circles has already taken a toll. Like that one MTS has been in infected in Ahamedabad RMS and another official in Telangana Circle. My federation through various letters it was clearly said that unless the precautions are taken the postal staff will not only be infected they will also become mode of spreading due to regular public contact.
The DOPT ordered to operate the offices with minimum staff and observing the roster system. The entire Banking Industry followed the orders of DOPT with letter and spirit, but in Postal department your office issued directions allowing the heads of Circles to take decisions based on the prevailing conditions in the respective states. Unfortunately many the Heads of Circles instead of ensuring the safety of the officials, went on finding new business opportunities at this hour of crisis. The demise of an official in Kolkatta circle must be a caution to the department as to how the operative staff of the department put to risks.
In the department no roster system is followed. Only in metro cities in selected offices it is followed. In rural districts though there is no transport facility even lady employees are struggled to reach interior offices and discharge duties. The social distancing is not maintained due to space constraints in the post offices. In states like Karnataka where Social security pensions are being disbursed through EMOs, the targets are fixed to clear the Lakhs of Emos within eight to ten days. My federation expresses the great displeasure regarding as to how the heads of Circles are thinking the Postal Operative staff are most immune to the deadly Virus.
Majority of the Heads of Circles so far failed to follow the guidelines issued by the DOPT and the advisory of the MOH.
If this way of functioning is continued there is possibility of many more Abdul Haasan in the Department. My federation therefore urges to issue specific directions to all the Heads of the circles on the following issues.
1. Adherence to DOPT directions in drafting the officials for duty
2. Adhering to MOH advisory in letter and spirit.
3. Reduced work hours of all the post offices across the country as there is no transport facility. Directions to close down the Pos at places which have been declared hotspot/Red Zone.
I request for immediate action and reply
Thank you,
Yours Sincerely

Establishment Review of Post Offices – guidelines in view of COVID-19