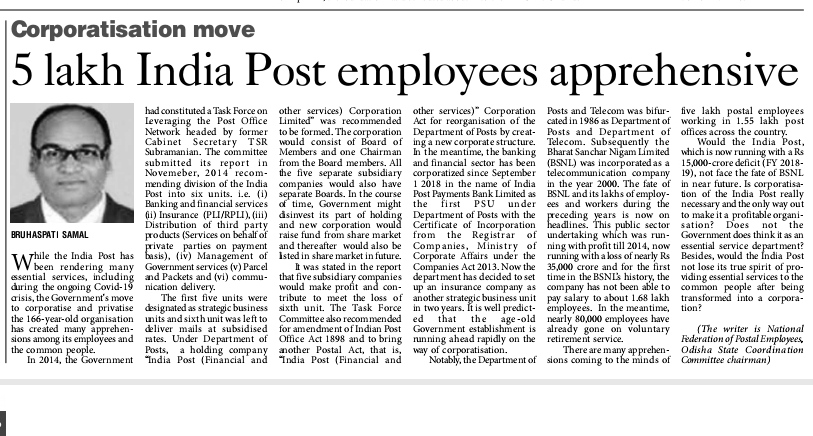 5 lakh India Post employees apprehensive
Wednesday, 15 April 2020 | BRUHASPATI SAM
While the India Post has been rendering many essential services, including during the ongoing Covid-19 crisis, the Government’s move to corporatise and privatise the 166-year-old organisation has created many apprehensions among its employees and the common people.
In 2014, the Government had constituted a Task Force on Leveraging the Post Office Network headed by former Cabinet Secretary TSR Subramanian. The committee submitted its report in Novemeber, 2014 recommending division of the India Post into six units. i.e. (i) Banking and financial services (ii) Insurance (PLI/RPLI), (iii) Distribution of third party products (Services on behalf of private parties on payment basis), (iv) Management of Government services (v) Parcel and Packets and (vi) communication delivery.
The first five units were designated as strategic business units and sixth unit was left to deliver mails at subsidised rates. Under Department of Posts, a holding company “India Post (Financial and other services) Corporation Limited” was recommended to be formed. The corporation would consist of Board of Members and one Chairman from the Board members. All the five separate subsidiary companies would also have separate Boards. In the course of time, Government might disinvest its part of holding and new corporation would raise fund from share market and thereafter would also be listed in share market in future.
It was stated in the report that five subsidiary companies would make profit and contribute to meet the loss of sixth unit. The Task Force Committee also recommended for amendment of Indian Post Office Act 1898 and to bring another Postal Act, that is, “India Post (Financial and other services)” Corporation Act for reorganisation of the Department of Posts by creating a new corporate structure. In the meantime, the banking and financial sector has been corporatized since September 1 2018 in the name of India Post Payments Bank Limited as the first PSU under Department of Posts with the Certificate of Incorporation from the Registrar of Companies, Ministry of Corporate Affairs under the Companies Act 2013. Now the department has decided to set up an insurance company as another strategic business unit in two years. It is well predicted that the age-old Government establishment is running ahead rapidly on the way of corporatisation.
Notably, the Department of Posts and Telecom was bifurcated in 1986 as Department of Posts and Department of Telecom. Subsequently the Bharat Sanchar Nigam Limited (BSNL) was incorporated as a telecommunication company in the year 2000. The fate of BSNL and its lakhs of employees and workers during the preceding years is now on headlines. This public sector undertaking which was running with profit till 2014, now running with a loss of nearly Rs 35,000 crore and for the first time in the BSNL’s history, the company has not been able to pay salary to about 1.68 lakh employees. In the meantime, nearly 80,000 employees have already gone on voluntary retirement service.
There are many apprehensions coming to the minds of five lakh postal employees working in 1.55 lakh post offices across the country.
Would the India Post, which is now running with a Rs 15,000-crore deficit (FY 2018-19), not face the fate of BSNL in near future. Is corporatisation of the India Post really necessary and the only way out to make it a profitable organisation? Does not the Government does think it as an essential service department? Besides, would the India Post not lose its true spirit of providing essential services to the common people after being transformed into a corporation?
(The writer is National Federation of Postal Employees, Odisha State Coordination Committee chairman)