Corona Warrior :Amid lockdown, Postmaster travels 120 km by his cycle to join duty in West Bengal.

Sh. Sanjib Halder (age 48), a Sub Postmaster (PM Gr.I / LSG) of Debagram Post Office in Nadia District of Bengal came to his residence at Garia in Calcutta after Saturday office hours on 21st March. Because of suspension of Train services from 22nd and subsequent Lockdown, he could not return to his place of posting next week. Debagram is about 160 Kms. away from Garia. Poor Halder tried to hire a vehicle showing his official identity but the Taxiwalla was asking for ₹6,000/-, which was too high for him to pay.
As time passed, Halder was getting more and more anxious to join his duty as in the beginning of month aged Pensioners, MIS Account holders turn up to Post Office for withdrawal. On an average 300 Account  holders turn up for transaction in a day at Debagram. His urge to attend office was so strong that on 2nd April he started for his office from Garia residence with his daughter’s cycle.
Halder started with a bottle of water and two packets of Biscuits at 5 in the morning. He had no idea of what it meant to travel 160 Kms. by cycle for a middle aged man. By the time he reached Barasat scorching Sun had reached the zenith. Because of dehydration he was blacking out. He continued with his struggle with all determination and crossed Kalyani. At Chakdaha he found someone selling Sugarcane juice. He took two glasses of juice, felt slightly better and started proceeding again.
Towards evening when he reached Palpara crossing at Krishnanagar, he looked so disoriented that local police intercepted him. They felt pity for the poor Postmaster who have already travelled 120 Kms. by cycle since morning. A vehicle carrying vegetables was going towards Debagram Bazar side. Police stopped it, helped Halder to climb on it with his cycle and asked the driver to drop the Postmaster to his office. By the time Halder reached office it was 8-30 at night.
I came to know this incident when ABP, the most powerful media house of Bengal brought it out with his photograph. I spoke to him on ‘phone. He did not expect such a ‘humble’ effort of him to reach office during Lockdown will reach the CPMG. – There are few Halders in every cadre and in every organisation of the Government who keep the system moving no matter what. – I salute them. 🙏🏼 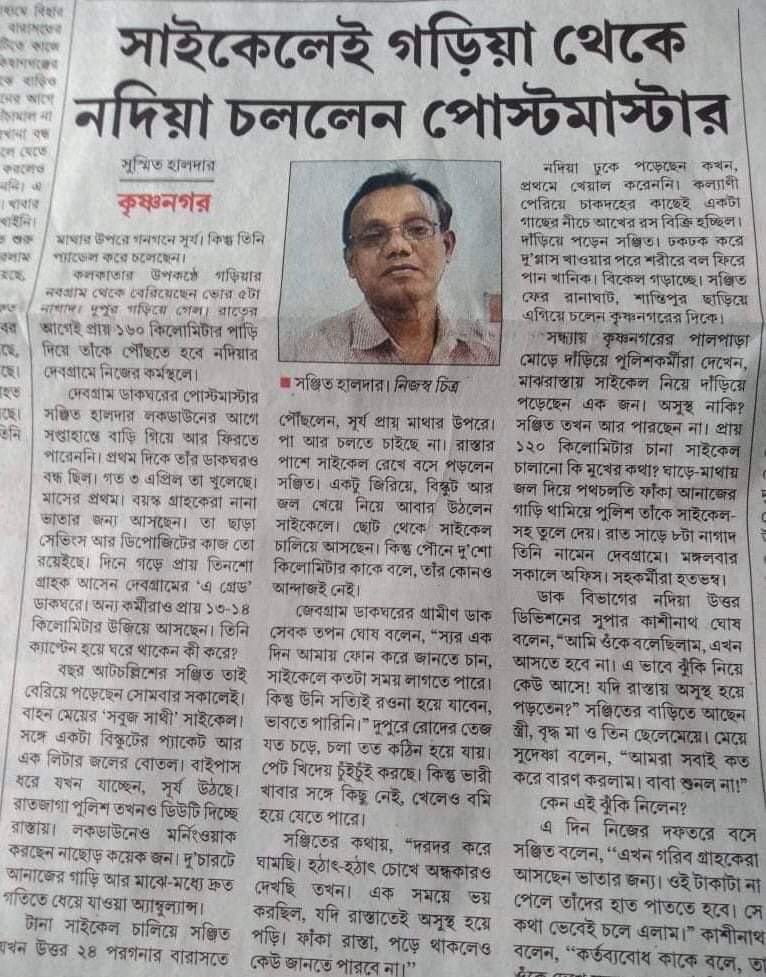 Establishment Review of Post Offices – guidelines in view of COVID-19