Sanction for holding an elective office under Rule 15(1)(c) of CCS(Conduct) Rules, 1964: DoPT OM dated 27.02.2019
F. No. 11013/1/2016-Estt.A-III
Government of India
Ministry of Personnel, Public Grievances & Pensions
Department of Personnel & Training (Establishment A-III Desk)
North Block, New Delhi — 110001
Dated: 27 February, 2020
OFFICE MEMORANDUM
Subject: Sanction for holding an elective office under Rule 15(1)(c) of CCS (Conduct) Rules, 1964—reg.
The undersigned is directed to refer to this Department O.M. No. 11013/1/2016­Estt.A-Ill dated 5.08.2019 (copy enclosed) to say that the competent authority has now approved the modification in Para 3 and Para 4 of the existing O.M. dated 5.08.2019. Para 3 and Para 4 of existing OM dated 5.08.2019 are modified as under:
3. The policy on fixing an upper limit of the number of years for which Government servants can hold elective office in any body in their entire career has been reviewed and it has been decided that a Government servant may be allowed to hold elective office in any body, whether incorporated or not, for period of two terms or for a period of 5 years, whichever is earlier, for which prior sanction would be required when a Government servant contests an election in such body, as per existing rules.
4. It is, therefore, necessary for the Competent Authority to keep in mind all the relevant factors while granting permission under Rule 15(1)(c) of CCS (Conduct) Rules, 1964. In cases where the Government servants have assumed charge of elected posts prior to the issuing of O.M. dated 5.08.2019, they may be allowed to complete the full period of their current tenure, except in cases where there are charges of corruption and adverse audit paras etc.“
2. All Ministries/Departments/Offices are requested to bring the above instructions to the notice of all administrative authorities under their control.
3. In their application to the employees of Indian Audit and Accounts Department, these order are issued after consultation with Comptroller and Auditor General of India, as mandated under Article 148(5) of the Constitution.
4. Hindi version will follow.
(Umesh Kumar Bhatia)
Deputy Secretary to the Govt. of India
To
The Secretaries of All Ministries/Departments
(as per the standard list) 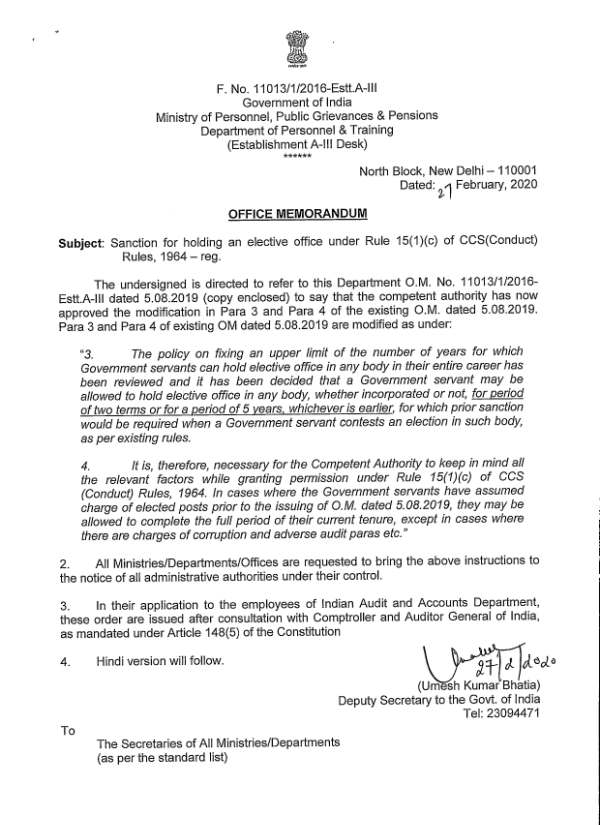 Transfers / Postings of officers of Postal Service Group B Cadre.

CCS (RP) Rules, 2016 – Opportunity for revision of option to come over to…