Jul 1, 2021
The Department of Posts on Saturday released a special phila-numismatic cover here to mark International Day of Forests.
Sudhir Gopal Jakhere, senior superintendent of posts, Coimbatore division, told The Hindu that the Department of Posts has come out with a pack that has special cover with a “Forestry for Development” commemorative 25 paise coin released in 1985. The cover also has a 600 mm mahogany veneer piece and a golden cancellation. The ₹5 stamp on the cover was designed by a student from Coimbatore in 2017. The pack also highlights “Gandhian Environmentalism” which is about minimalism, he said. The presentation pack is priced at ₹700. Just 30 of these packs are available for sale.
The special covers, without the pack, are also available for sale at the philately bureau here. Apart from these, the Department has released packs of 10 cards that have pictures of some of the trees located in the Western Ghats. These cards come with a QR code that can be scanned to know the location of these tress in the Western Ghats. The INTACH Kodaikanal has given rights to the Department to use the photographs, he said. The cancelled cards are priced at ₹250 and the packs without cancellation at ₹150 a set. An elite pack is also available that gives details about the trees in the post cards.
Coimbatore Division has so far released four phila-numismatic covers, he said.
Releasing the covers and packs, Sheuli Burman, Postmaster General, Western Region, pointed out that it is the duty of every citizen to protect the environment and the forests.
C Selvaraj, numismatist and philatelist, said the 1985 coin in the cover is a limited edition coin and is dedicated to forests. 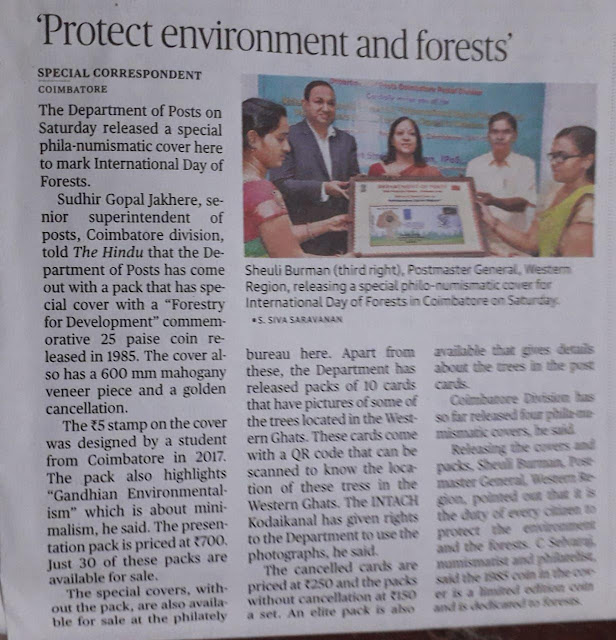 Preventive measures to contain the spread of COVID-19 : Kerala Circle Office letter to All Divisions on 20.03.2020