The central government has declared a paid holiday at all government offices in Delhi on February 8, the day the national capital goes to polls. According to a notification issued by the Department of Personnel and Training, Ministry of Personnel, Public Grievances and Pensions, all government offices and industrial establishments will be closed in the national capital on February 8 to allow people to take part in the democratic exercise. 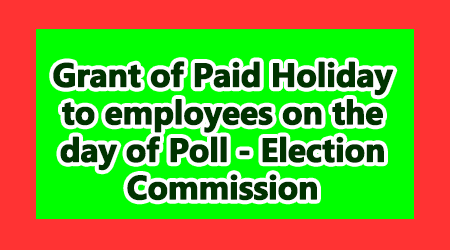 “It is stated that the guidelines issued by the department regarding the closure of the government offices and grant of the paid holiday may be followed by all the Central government offices, including the industrial establishment in the NCT Delhi,” the notification, signed by Deputy Secretary of the Government of India, Jugal Singh, reads.
According to the Representation of the People Act, 1951, the polling date is a paid holiday for all eligible voters working in any business, trade, industrial undertaking or any other establishment. The relevant provision is in Section 135B which reads, “Every person employed in any business, trade, industrial undertaking or any other establishment and entitled to vote at an election to the House of the People or the Legislative Assembly of a State shall, on the day of poll, be granted a holiday.”
The polling in Delhi will take place in a single phase on February 8. The results will be declared on February 14. The tenure of the current Legislative Assembly expires on February 22.
The Delhi Legislative Assembly comprises 70 seats and a party or an alliance needs the support of at least 36 MLAs to form the government. In the 2015 Assembly polls, the Aam Aadmi Party had stormed to power with 67 seats. The BJP had won just three seats. The Congress which ruled the Union Territory between December 1998 and December 2013 drew a blank.
Source: financialexpress

Bye Elections 2019 : Paid holiday to Karnataka employees on the day of poll…

Election Holiday (Leave) for Employees on the Day of Poll

General Election in Haryana and Maharashtra on 21.10.2019 – Paid holiday to employees…