32nd All India conference of AIPEU Gr C ended successfully !
The Central Working Committee meeting (19.10.2019) and first day open session (20.10.2019) proceedings are already shared with all our comrades and SAPOST viewers
From 20.10.19 evening onwards, subject Committee was started and more than100 comrades were given their names for deliberations in the conference.
Com.J.Ramamurthy, President CHQhas commenced the subject committee with his presidential address and com.R N Parashar , General Secretary has initiated the debate with his follow up speech.
Then the house was presided by Com. Janakiram, Working President.
Thereafter, all the Circle Secretaries discussed on various issues that, we are facing in the department and also on the issues, the working class is facing in our Country mainly because of the privatisation and corporatising policies of the Central Government.
Rest from 21st and upto lunch on 22nd, 72 delegates from various parts of the country have discussed and deliberated on all the issues from Division to Country level, which is the record participation of the ground level cadres at the highest forum, that is guiding the higher body to take appropriate decision and action at the movement in the future .
In between the session, on the third day, our senior leader of the organisation com. KVS has delivered a vibrant speech which is thought provoking and the entire house observed with a pin drop silence. He has presented on various issues with specific direction to approach with, for settlement and also for further struggle on the vital policy issues the Department is facing. Earlier , Com. Mohanty , General Sec., of our P4 Union, Com.P.Suresh , Gen Sec of our R4 Union and Com.P.Panduranga Rao, Gen Sec of our GDS union have taken part and addressed in the subject committee .
Then after lunch break on the closing , com. R.N Parashar, General Secretary has replied on most of the issues raised by the delegates and winded off the delegate session .The credentials were read out by Com.A.Veeramani, AGS. Out of 836 entitled delegates , 711 delegates were taken part from 23 Circles, in the conference.
As for as Tamilnadu Circle is concerned, out of 126 eligible delegates , 116 were attended. This is a record break strength and TN Circle Union maintained the no.1 position as usual , the next major Circle’s entitlement of delegate position is only86.
Thus Tamilnadu Circle proved as the biggest Circle with majority strength of its membership, despite of 40% shortage of staff. Then the house was duly composed.
Com.Janardhan Majumdar, Deputy General Secretary has read out more than 23 resolutions already prepared by the commitees on various issues and they were passed in the house unanimously.
Finally the election of office bearers was announced. The following office bearers were elected unanimously .
President : Com.N.Subramanian (TN)
Wkg President: Com.G Janakiram (Ktka)
” ” ” Com.Sudhir Mane (MH)
Vice Presidents:
Com Nanda Sen(W.B.)
Com.R.K.Chaubey (M P.)
General Secretary:Com.R.N.Parashar(U.P.)
Deputy General Secretary:
Com.Janardhan Majumdar(W.B.)
Financial Secretary:
Com.Balwinder Singh (ND)
Asst Financial Secretary:
Com.Naresh Gupta(Haryana)
Asst General Secretaries:
Com.P.K.Muralidharan (Kerala)
Com A.Veeramani (TN)
Com.SSRA Prasad (Telengana)
Org Gen secretaries:
Com.Rajasekaran (A.P.)
Com.Bruhaspati Samal (Odisha)
Com.A.M Sekar (TN)
The following were nominated as the representatives of the All India Mahila Committee:
Chairperson :Com.Geeta Bhattacharjee(ND)
Convener : Com. P.Rema (Kerala)
Mahila Committee Members from TN:
Com. A.Valarmathi (TN-CBE)
Com. J Renuga (TN-NM)
Com.Santhi (TN- CBE)
We wish the new set of office bearers to create a record success on all the demands and agitations during the upcoming period .
The conference was ended with a vote of thanks by com SSRA Prasad , General Convener of the Reception Committee.
We, on behalf of TN Circle , convey our sincere thanks to the Reception Committee
of the 32 nd All India Conference, who made the extensive and elaborate arrangements and served food to all our comrades continuously for 5 days even without demanding of any token.
We record our special thanks to the entire young team of the Reception Committee headed by Com.Prasad and Com.Rajkumar.
Some of the photos taken during the conference proceedings are posted below for your view.
SAPOST Congratulates newly elected office bearers of AIPEU Group C 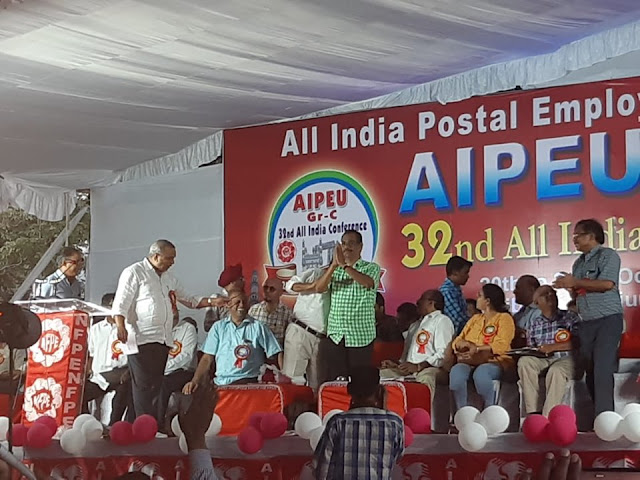 Invitation to 32nd AIC of AIPEU, Group-C, CHQ at Hyderabad