Normally, I open my office at about 9.15 AM  to enable my staff members to maintain the working hours from 9.30 AM to 5.30 PM. But just before the normal business hour, when the MTS opens the public entrance of the office, I have been marking a peculiar incident for last five months since my joining here in this Post Office.

As soon as the gate is opened, a man about 55 years of age wearing dirty pant / shirt, having unshaven beard on the face and uncombed grey hairs on the head rushes into the public area. First of all he goes to the water filter and takes a glass of water and then comes to the Stamp Counter. He then asks for one or two Post Cards or Inland Letter Cards as per his requirement. On receipt from the counter, he then goes to the public writing desk and starts writing letters in the same Post Card(s) / Inland Letter Card(s). Within 15 to 20 minutes, he finishes the job and leaves the post office putting the letters in the outside letter boxes in a hurry.
Hardly, there will a day when he has not attended the Post Office Witnessing this regular event, I couldn’t suppress my curiosity. To satisfy my inquisitiveness, I requested him one day come to my chamber.
Briefly conveying my observations for last 5 months, I asked him “Due to rapid growth of Information Technology, when we witness people to hardly purchase Post Cards / Inland Letter Cards etc. now a day on one hand and when people want instant communication and response from other side through mobile, internet and different social media on the other, I am surprised that you are writing and posting two / three letters regularly. Are you writing to your family members or anybody else?”
“No Sir”, he replied, “I have no family. I am a bachelor and belong to the district of Mayurbhanj.   Due to continuous torture of my step mother, I could not complete my B Sc and left my village at the age of 21 and started working in a private Aluminium factory here in Bhubaneswar. I also completed my C T course privately. But could not get any Govt. job. While working in the factory, I met a major road accident with serious injury in my right leg and partially lost my hearing capacity. The factory owner fired me out. Since then I wandered here and there in search of a job. A small hotel owner engaged me in cleaning utensils in his hotel and since then I am working and staying there. Now I am 57.”

Swiftly telling me at a stretch, he showed me his right leg which has been bent below the keen and causing difficulty in normal walking.
Expressing grief, I enquired, “To whom then you are writing letters regularly?”
“Earlier when I had money with me, I was writing to the Presidents and Prime Ministers of various countries of the world. Since my income has been very low and now I am unable to afford the cost of postage to foreign countries, presently I am writing to the professors, vice-chancellors and other high dignitaries of different universities”, he replied very normally.
I became more curious to know the contents of his writings. With every politeness, I just asked, “If you don’t take it otherwise, may I know the theme of your writings to such high dignitaries?”
He was worried, I marked and in a hurry to leave the post office. I told, “If you have any objection or if you don’t want to share, then you may not discuss.”
“That is not the issue, Sir”, he replied. “I have come here finishing all the morning works in the hotel. My work will again start from 10 AM. If I will be late, my owner may drive me away from the job”.
Immediately, I changed the topic and requested him to attend his job. “We may talk on some other day”, I told.
“No Sir”, since you have asked me with so much anxiety, “I will tell”, he emotionally told me. “I have also gone to other post offices. But many people treat me as a mad. Some have even handed over me to police and ordered me not to enter their premises. Nobody has ever tried to understand me”. 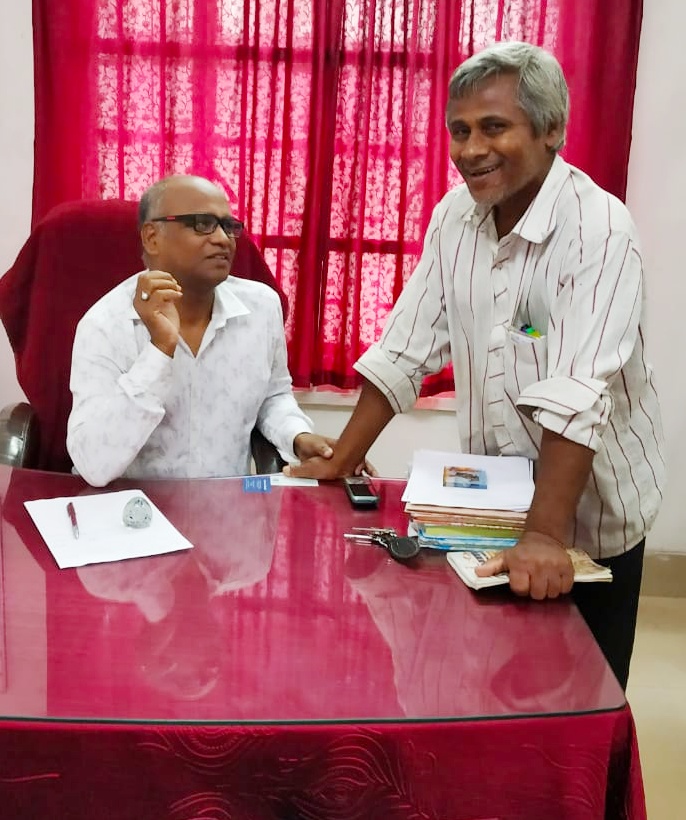 I marked drops of tears in his eyes.  I also became sentimental. Tightly holding his palms, I requested him to continue.
He started, “While I was a student in MPC College, Baripada in the district of Mayurbhanj during 1983, I became associated with the Hindu spiritual movement of Brahma Kumaries which teaches a form of meditation that focuses on identity as souls, as opposed to bodies. I was greatly inspired by their teachings to transcend labels associated with the body, such as race, nationality, religion and gender which aspire to establish a global culture based on what it calls Soul-consciousness. Sir, I had an ambition to be a teacher and to educate people of the world for bringing spiritual consciousness. But unfortunately, I am now working in a road side hotel from dawn to dusk to feed my belly.”
In a sensitive mood he continued, “Finding no other alternative to share my knowledge what I have gained from the Brahma Kumaries, I took the shelter of your post cards and inland letter cards, Sir.”

Gladly he said, “The post card is my best friend now. It is the poor man’s best medium of communication. I use the same for sharing the ethics of Brahma Kumaries to achieve the goal of establishing a new world characterized by honesty, sincerity and goodwill. When I write on the post card, I feel as if I am in a class room and writing on a black board. When I drop a post card in your letter box, I feel that I educate one person of the world.  At a cost of Re.0.50 only, I share my knowledge to aware the people on spiritual consciousness from Kashmir to Kanyakumari. Only for your Department, I have been able to write continuously as such since 1983.
Being depressed, he told, “When I have to write more, I hardly depend on an Inland Letter Card. But it is too difficult now on my part to sacrifice Rs.2.50/- . So I use postcards often. I am in search of Meghdoot Post Cards which will cost me less. Kind request to arrange for me Sir”.
I was about to ask him if he has received any response against such letters posted to numerous people of the world, he left my office in a hurry. I just looked at him. When we are dreaming of a digital India and now to digitize India Post turning our back to the handwritten letters, such customers still remind us about the importance of such letters may be in a Post Card.
Really he was a mad, a mad for letters, a mad for sharing knowledge, a mad for bringing spiritual consciousness among the people and a mad for establishing a new world full of peace through postcards.
Extremely proud of my India Post’s low cost Post Card which has the power to share love, emotions, agony, ecstasy and what not throughout the world.
Source : SApost