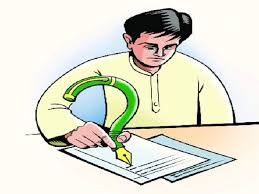 CHENNAI: Three days before the written exams for recruitment of postmen and four other posts, the postal department has withdrawn the option of taking the tests in regional languages. The exams on July 14 will now be only in English and Hindi.
Till last year, candidates were allowed to take the exams in any of the 15 languages where Hindi was not the local language. These included Tamil, Telugu, Malayalam and Kannada in the southern states. Job aspirants have condemned the revised exam pattern released on July 11.
The postal department’s recruitment drive in 2016-17 had triggered a controversy with many Hindi-speaking candidates from Maharashtra and Haryana scoring more than TN candidates in the Tamil paper. CBI is investigating the case. More than one lakh candidates from Tamil Nadu had applied for the exams. The department of posts will conduct test to fill posts of postman, assistant postman, multi-tasking staff (MTS), mail guard and sorting assistants on July 14.
Postal department fails to provide reason for last-min change
Around 1,000 posts are vacant in Tamil Nadu, according to official data.
The test, conducted by the department of posts, functioning under the Union communications ministry, includes three papers. Merit list for appointment is based only on score in paper-I and other two are qualifying tests. Except for the data entry skill test (paper-III), the other two papers contain multiple choice questions.
“These questions will be in English, Hindi or the local language of the state,” read the official notification dated May 16. The department, however, revised the exam pattern on July 11, restricting language options to Hindi and English.
“It’s unfair,” said J Ramamoorthy from All India Postal Employees Union. “The vacancies in Tamil Nadu are primarily in rural areas Employees should be able to converse in Tamil as Hindi or English will not help.” Many people from Hindi-speaking states have managed to get postal department jobs (direct recruitment) in Tamil Nadu, he said. “Since we cannot post them at counters or rural areas, they work back office in Chennai. Now more people from other states will get recruited in vacancies filled by promotion too,” he said.
The postal department hasn’t mentioned the reason for the last minute change. Despite repeated attempts, postal authorities could not be reached
Source : https://timesofindia.indiatimes.com/city/chennai/centre-drops-tamil-postal-jobs-test-now-only-in-english-hindi/articleshow/70199273.cms
Read Also
Exams

AISBCEU CHQ Letter to Directorate : Request to intervene in the Finacle & MIS server slow process in report generation. Hats off to the AISBCEU Union for speedy action.

To put on hold all examinations in DoP till further orders