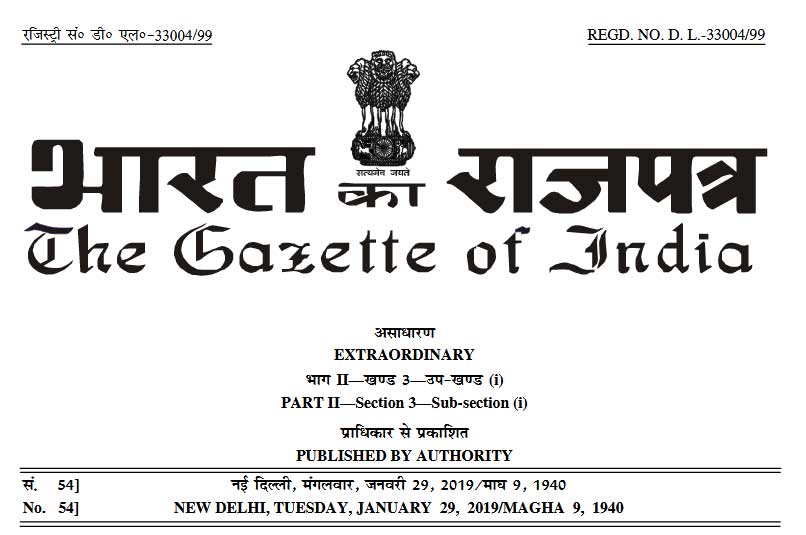 MINISTRY OF LABOUR AND EMPLOYMENT
NOTIFICATION
New Delhi, the 29th January, 2019
G.S.R. 56 (E).- Whereas a draft of certain rules further to amend the Minimum Wages (Central) Rules, 1950, among other rules, were published as required by sub-section (1) of section 30 of the Minimum Wages Act, 1948 (11 of 1948), in the Gazette of India, Extraordinary, Part II, Section 3, sub-section (i) vide notification of the Government of India in the Ministry of Labour and Employment number G.S.R. 413(E),dated the 23rd April, 2018, inviting objections and suggestions from all persons likely to be affected thereby, within a period of three months, from the date on which copies of Official Gazette containing the said notification were made available to the public;
And whereas copies of the said Official Gazette were made available to the general public on the 23rdApril, 2018;
And whereas the objections and suggestions received on the said draft rules from the public have been considered by the Central Government;
Now, therefore, in exercise of the powers conferred by section 30 of the said Act, the Central Government hereby makes the following rules further to amend the Minimum Wages (Central) Rules, 1950, namely:-
(1) These rules may be called the Minimum Wages (Central) Amendment Rules, 2019.
(2) They shall come into force on the date of their publication in the Official Gazette.
In the Minimum Wages (Central) Rules, 1950,-(a) in rule 21, for sub-rule (4A), the following sub-rule shall be substituted, namely:-
(4A) Every employer shall, on or before the 1st day of February in each year, upload unified annual return in Form III on the web portal of the Central Government in the Ministry of Labour and Employment giving information as to the particulars specified in respect of the preceding year:
Provided that during inspection, the inspector may require the production of accounts, books, registers and other documents maintained in electronic form or otherwise.Explanation.- For the purposes of this sub-rule, the expression “electronic form” shall have the same meaning as assigned to it in clause (r) of section 2 of the Information Technology Act, 2000 (21 of 2000).’;
(b) in Form III, for the word, figures, brackets and letter “Rule 21(4A)(1)”, the word, figures, brackets and letter “Rule 21(4A)” shall be substituted.
[No. Z-20025/22/2018-LRC]
MANISH KUMAR GUPTA, Jt. Secy.
Note: The Minimum Wages (Central) Rules, 1950 was published in the Gazette of India vide notification number S.R.O. 776, dated the 14th October, 1950 and lastly amended vide notification number G.S.R. 182(E) dated the 12th March, 2015.
Source: labour.gov.in
Read Also
Rules