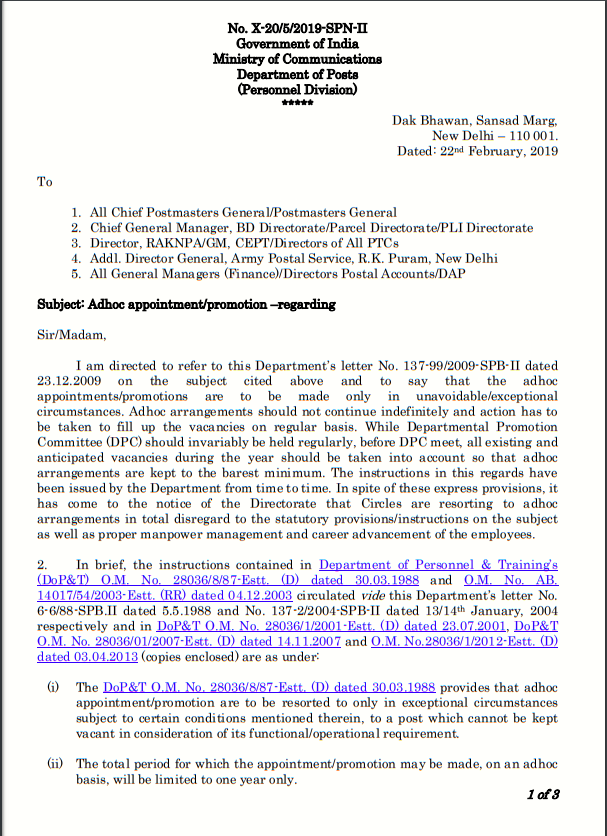 Adhoc appointment/promotion-regarding
No. X-20/5/2019-SPN-II
Government of India
Ministry of Communications
Department of Posts
(Personnel Division)
*****
Dak Bhawan, Sansad Marg,
New Delhi – 110 001.
Dated: 22nd February, 2019
To
1. All Chief Postmasters General/Postmasters General
2. Chief General Manager, BD Directorate/Parcel Directorate/PLI Directorate
3. Director, RAKNPA/GM, CEPT/Directors of All PTCs
4. Addl. Director General, Army Postal Service, R.K. Puram, New Delhi
5. All General Managers (Finance)/Directors Postal Accounts/DAP
Subject: Adhoc appointment/promotion –regarding
Sir/Madam,
I am directed to refer to this Department’s letter No. 137-99/2009-SPB-II dated 23.12.2009 on the subject cited above and to say that the adhoc appointments/promotions are to be made only in unavoidable/exceptional circumstances. Adhoc arrangements should not continue indefinitely and action has to be taken to fill up the vacancies on regular basis. While Departmental Promotion Committee (DPC) should invariably be held regularly, before DPC meet, all existing and anticipated vacancies during the year should be taken into account so that adhoc arrangements are kept to the barest minimum. The instructions in this regards have been issued by the Department from time to time. In spite of these express provisions, it has come to the notice of the Directorate that Circles are resorting to adhoc arrangements in total disregard to the statutory provisions/instructions on the subject as well as proper manpower management and career advancement of the employees.
2. In brief, the instructions contained in Department of Personnel & Training’s (DoP&T) O.M. No. 28036/8/87-Estt. (D) dated 30.03.1988 and O.M. No. AB. 14017/54/2003-Estt. (RR) dated 04.12.2003 circulated vide this Department’s letter No.6-6/88-SPB.II dated 5.5.1988 and No. 137-2/2004-SPB-II dated 13/14th January, 2004 respectively and in DoP&T O.M. No. 28036/1/2001-Estt. (D) dated 23.07.2001, DoP&T O.M. No. 28036/01/2007-Estt. (D) dated 14.11.2007 and O.M. No.28036/1/2012-Estt. (D) dated 03.04.2013 (copies enclosed) are as under:
(i) The DoP&T O.M. No. 28036/8/87-Estt. (D) dated 30.03.1988 provides that adhoc appointment/promotion are to be resorted to only in exceptional circumstances subject to certain conditions mentioned therein, to a post which cannot be kept vacant in consideration of its functional/operational requirement.
(ii) The total period for which the appointment/promotion may be made, on an adhoc basis, will be limited to one year only.
1 of 3  No. X-20/5/2019-SPN-II
(iii) The practice of giving a break periodically and appointing the same person on an adhoc basis may not be permitted.
(iv) In case there are compulsions for extending any adhoc appointment/promotion beyond one year, the approval of the DoP&T is required to be sought at least two months in advance before the expiry of the one year period. If the approval of DoP&T to the continuance of the adhoc arrangements beyond one year is not received before the expiry of the one year period, the adhoc appointment/promotion shall automatically cease on the expiry of the one year term.
(v) Adhoc promotions may be made on the basis of seniority-cum-fitness basis even where promotion is by selection method. Only those employees in the feeder grade who fulfill the eligibility conditions prescribed in the Recruitment Rules should be considered for adhoc promotion.
(vi) Permission to make adhoc appointment should be granted by the authority one level higher than the appointing authority for that post.
(vii) The DoP&T O.M. No. 28036/1/2001-Estt(D) dated 23.07.2001 provides that whenever an appointment is made on adhoc basis, the fact that the appointment is adhoc and that such an appointment will not bestow on the person a claim for regular appointment should be clearly spelt out in the orders of appointment. It should also be made clear that the service rendered on adhoc basis in the grade concerned would not count for the purpose of seniority in that grade and for eligibility for promotion to the next higher grade.
(viii)The DoP&T O.M. No. AB. 14017/54/2003-Estt. (RR) dated 04.12.2003 provides that for consideration of adhoc promotions, the crucial date of eligibility would be the same as for regular promotions i.e., January 1.
(ix) DoP&T O.M. No. 28001/8/2007-Estt. (D) dated 14.11.2007 provides for delegating powers to the concerned Ministry/Department for appointing the officials to Gr. C and Gr. D posts on adhoc basis upto a period of 3 (three) years. Further extension of one year at a time upto two years can be granted with the approval of the Secretary concerned.
(x) DoP&T vide O.M. No. 28036/1/2012-Estt. (D) dated 03.04.2013, has mentioned brief of various instructions with respect to adhoc appointments/promotions those should be followed strictly while considering adhoc appointments/promotions.
Further, Circle should review the adhoc appointments/promotions made by them from time to time, and at least once a year, on the basis of the guidelines and instructions in force, so as to bring down the instances of such adhoc manpower arrangements to the barest minimum.
(xi) Claims of Scheduled Castes and Scheduled Tribes in adhoc promotions shall be considered in the DoP&T O.M. No. 36011/14/83-Estt. (SCT) dated 30.04.1983.
2 of 3 No. X-20/5/2019-SPN-II
3. It is requested that instructions issued by DoP&T from time to time should be followed scrupulously while considering the case of adhoc appointment/promotions. These instructions may also be brought to the notice of all subordinate units.
4. Hindi version will follow.
Yours faithfully,
sd
Copy to:
1. PS to Minister of State for Communications (IC)
2. Sr. PPS to Secretary (Posts)/Sr. PPS to Director General Postal Services
3. PPS/PS to Addl. DG (Co-ordination)/ Member (Banking)/ Member (O)/ Member
(P) /Member (Planning & HRD)/ Member (PLI)/ Member (Tech)
4. Additional Secretary & Financial Adviser
5. Sr. Deputy Director General (Vigilance) & CVO/ Sr. Deputy Director General
(PAF)
6. Director General P&T (Audit), Civil Lines, New Delhi
7. Secretary, Postal Services Board/ All Deputy Directors General
8. Chief Engineer (Civil), Postal Directorate
9. All Sections of Postal Directorate
10.All recognized Federations/ Unions/ Associations
11.GM, CEPT for uploading the order on the India Post website
12.OL Section with request to translate the orders.
13.Guard File
14.Spare copies.
To view Dte’s letter No : X-20/5/2019-SPN-II dated 22.02.2019 , please Click here
Read Also
Promotion