(PUBLISHED IN PART I SECTION 1 OF GAZETTE OF INDIA)
F.NO. 5(1)-B(PD)/2018
Government of India
Ministry of Finance
Department of Economic Affairs
(Budget Division)
New Delhi, the 03 January, 2019
RESOLUTION
It is announced for general information that during the year 2018-2019, accumulations at the credit of subscribers to the General Provident Fund and other similar funds shall carry interest at the rate of 8% (Eight percent) w.e.f. 1st January, 2019 to 31st March, 2019. This rate will be in force w.e.f.1st January, 2019. The funds concerned are:
2. Ordered that the Resolution be published in Gazette of India.
Sd/-
(Akhilesh Kumar Mishra)
Director (Budget) 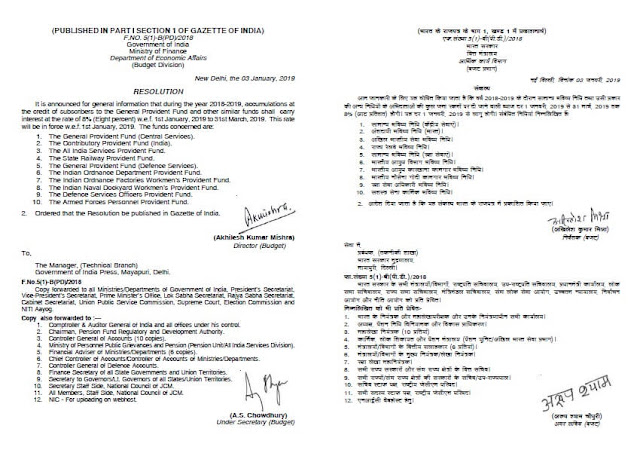