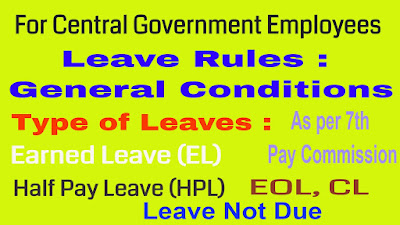 1. Earned Leave:-   Earned Leave is ‘earned’ by duty. The credit for earn leave will awarded at a rate of 15 days on the 1st of January and 1st of July every year. It can be accumulated up to 300 days in addition to the number of days for which encashment has been allowed along with LTC. Maximum of 180 days at a time can be availed in the case of Earned Leave.

2. Half Pay Leave :-  All Government servants are entitled to 20 days of HPL for every completed year of service. Half pay leave is calculated at 20 days for each completed year of service. For eg, if you are in service for 2 years , you will be having a total of 40 days of half pay leave. The service includes periods of duty and leave including extraordinary leave with or without MC. Half pay leave can be availed with or without MC(Medical Certificate). From 1st January 1986, half pay leave is credited in advance at the rate of 10 days on the 1st of January and 1st of July every year.

5. Maternity Leave :-  Maternity leave is granted to women government employees.1) Pregnancy: 180 days – Admissible only to employees with less than two surviving children.2) Miscarriage/abortion (induced or otherwise): Total of 45 days in the entire service. However, any such leave taken prior to 16.6.1994 will not be taken into account for this limitation. Admissible irrespective of number of surviving children. Application to be supported by a certificate from a registered medical practitioner for NGOs and from AMA for GOs.The maternity leave is not debited to leave account and full pay is granted. It cannot be combined with any other leaves and counts as service for increments and pension.

6. Paternity Leave :- A male employee with less than two surviving children may be granted Paternity Leave for a period of 15 days during the confinement of his wife. During the period of such leave he shall be paid leave salary equal to the pay drawn immediately before proceeding on leave. Paternity Leave shall not be debited against the leave account and may be combined with other kind of leave as in the case of Maternity Leave.

7. Study Leave:- Study leave may be granted to all government employees with not less than five years’ service for undergoing a special course consisting of higher studies or specialized training in a professional or technical subject having a direct and close connection with the sphere of his duties as a civil servant.
The course for which the study leave is taken should be certified to be of definite advantage to govt from the point of view of public interest and that particular study should be approved by the authority competent to grant leave.
The official should submit a full report on the work done during study leave. Maximum of 24 months of leave is sanctioned. In the case of CHS officers 36 months of leave can be granted at a stretch or in different spells.
Study leave will not be debited to the leave account and may be combined with other leave due. Study leave is not granted for studies outside India if facilities are available in India and to an official due to retire within 3 years of return from the study leave.

9. Casual Leave :- In a calendar year eight days of casual leave is permissible.Casual leave is not a recognized form of leave and is not subject to any rules made by the Government of India. An official on Casual Leave is not treated as absent from duty and pay is not intermitted.
(i) Casual Leave can be combined with Special Casual Leave/vacation but not with any other kind of leave.(ii) It cannot be combined with joining time.(iii) Sundays and Holidays falling during a period of Casual Leave are not counted as part of Casual Leave.(iv) Sundays/public holidays/restricted holidays/weekly offs can be prefixed/suffixed to Casual Leave.(v) Casual Leave can be taken while on tour, but no daily allowance will be admissible for the period.(vi) Casual Leave can be taken for half day also.(vii) Essentially intended for short periods. It should not normally be granted for more than 5 days at any one time, except under special circumstances.(viii) LTC can be availed during Casual Leave.(ix) Individuals appointed and joining duty during the middle of a year may avail of Casual Leave proportionately or to the full extent at the discretion of the Competent Authority.
10. Child Care Leave :- Woman employees having minor children may be granted Child Care Leave by an authority competent to grant leave for a maximum period of 730 days (2 years) during their entire service for taking care of up to two children., whether for rearing or to look after any of their needs like examination, sickness, etc..Conditions for Child Care Leave1. Child care leave shall not be admissible if the child is eighteen years of age or older equal to the pay drawn immediately before proceeding on leave.2. It can be availed in more than one spell.3. It can not be debited against the leave account.4. It may be combined with leave of the kind due and admissible.

11. Hospital Leave:- Hospital leave is admissible to Group ‘C’ employees whose duties involve handling of dangerous machinery, explosive materials, poisonous drugs and performance of hazardous takes and to Group ‘D’ Employees.Medical certificate from an authorized medical attendant is necessary for grant of this leave. This hospital leave may be combined with any other kind of leave due and admissible, provided total period of leave does not exceed 28 months.

13. Special Disability Leave :- Special disability leave admissible to all employees when disabled by injury intentionally or accidentally inflicted or  caused in or in consequence of the due performance of official duties or in consequences of official position. The disability above should have manifested within three months of the occurrence to which it is attributed and the person disabled had acted with due promptitude in bringing it to notice. The leave sanctioning authority, if satisfied as to the cause of the disability, may relax the condition and grant leave in cases where disability has manifested more than three months after the occurrence of its cause.
Special disability leave is also admissible when disabled by illness incurred in the performance of any particular duty, which has the effect of increasing liability to illness or injury beyond the ordinary risk attaching to the civil post held, under the same condition.This disability should be certified by an Authorised Medical Attendant to be directly due to the performance of the particular duty.
Maximum of 24 months of leave may be granted.May be combined with any other leave.Will count as service for pension.Will not be debited to the leave account.

14. Child Adoption Leave:-  Child adoption leave is granted to Female employees, with fewer than two surviving children on valid adoption of a child below the age of one year, for a period of 135 days immediately after the date of valid adoption.
Leave salary will be equal to the pay drawn immediately before proceeding on leave.It may be combined with leave of any other kind. Leave not debited against the leave account.

15. Leave to Probationers :- A person appointed to a post on probation is entitled to all kinds of leave admissible under the rules to a permanent servants according as his appointment is against a permanent post.

16. Leave to Apprentices :- Apprentices are admissible to leave on medical certificate, on leave salary equivalent to half pay for a period not exceeding one month in any year of apprenticeship
Share WhatsAppFacebookTelegramTwitter