AAO: Implementation of CAT Order in respect of educationists AAOs

Reference is invited to this office OM No. A-60015/1/2017/MF CGA(A)/NGE/647 dated 13th February, 2018 on the subject mentioned above vide which AAOs of CCAS consequent to implementation of 6th CPC w.e.f. 01.01.2006 were allowed minimum entry pay from the date of their promotion as AAO.
It is mentioned that some officials of other Accounts Service were posted as AAO on deputation basis in the various offices under Civil Accounts Organization during the period 01.01.2006 to 31.12.2015. The clarification on the matter whether such benefit extended to deputationist AAOs has been sought from Department of Expenditure. The matter at present is under consideration in the Department. In this regard, it is requested to provide details in respect of such Assistant Accounts Officers in the enclosed proforma.
This issues with the approval of Joint Controller General of Accounts.
(S. K. Gupta)
Sr. Accounts Officer 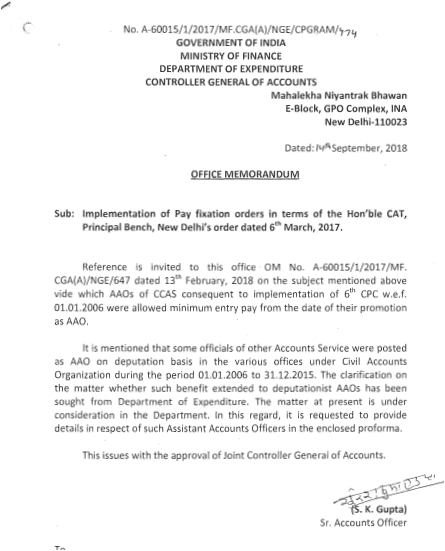 What we get after 7th CPC? [Ready Reckoner – HRA,DA,TA,TPTA,CEA]

Grant of NFG to AAO after 4 Years Service