SC clears decks for reservation in promotion to SC/ST staffers

In a shot in the arm for the Modi government facing flak over Supreme Court striking down automatic arrest under the law on prevention of atrocities against Dalits and tribals, the apex court on Tuesday allowed the Centre to implement the long-stalled reservation in promotion policy.
While quotas in promotions will be in “accordance with law”, which will mean under-representation of scheduled castes and tribes must be established while also ensuring administrative efficiency is not compromised, the SC decision to lift the stay will open the doors for implementation of the policy. 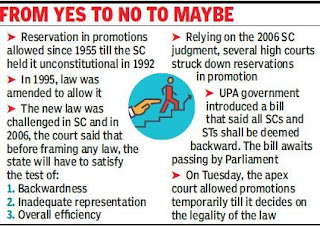 In 2006, the apex court had itself upheld constitutional amendments for quota in promotion in government jobs while calling for data on extent of backwardness, which has not proved easy to quantify. The contentious issue, pressed aggressively by BSP and Dalit activists and supported by all major political outfits, has been caught in a legal tangle and judicial stays.
With governments failing to comply with guidelines, various high courts quashed the decision on granting reservation in promotion from 2011 onwards. Punjab and Haryana HC quashed the reservation policy in the income tax department and this was followed by other HCs. Last august, Delhi HC quashed the Centre’s office memorandum issued in 1997 on implementing the policy and also set aside all such promotions in the last 20 years.
In an appeal filed by the Centre, the apex court had in 2015 directed to maintain status quo. Even now, as the Centre and the states begin implementation of quotas, the action is liable to be challenged on similar grounds such as representation and efficiency, but the Centre has the opportunity to present evidence of having done so.
With the policy is at a standstill over the last seven years, Centre insistently sought the green signal to go ahead and implement reservations. Additional solicitor general Maninder Singh, appearing for the Centre told a vacation bench of Justices A K Goel and Ashok Bhushan that the government had a constitutional duty to promote its employees as per law and sought approval from the court.
“There had been no promotion. All promotion is stayed. I am government and it is my duty to promote my employee as per the law. It is not that Nagraj order is not to be complied with,” Singh said. The ASG placed before the bench an order passed by another bench of SC allowing reservation in policy during pendency of the case and pleaded the court to pass similar order.
Senior advocate Shanti Bhushan and lawyer Kumar Parimal, appearing for anti-quota activists, opposed the Centre’s plea and said the issue has been referred to a Constitution bench and any interim order should be passed by that bench.
The court, after a brief hearing, made it clear that the Nagraj order pertaining to collecting quantifiable data had to be followed. “It is made clear that the Union of India is not debarred from making promotions in accordance with law, subject to further orders, pending further consideration of the matter,” the bench said.
It however, refused to clarify which law is to be followed by the Centre in view of various judgments and order passed by the HCs and the apex court. “We can say that you can go ahead with the promotion policy as per the law. If there is law, then you do it as per the law. We do not need to mention the law in our order,” the bench observed while hearing the case.
Though the Centre is upbeat, doubts remain whether it will be able to fulfill guidelines fixed in the Nagraj case to give quota in promotions in government jobs. As the SC order says it has to be done as per the law, anti-quota petitioners say the hands of governments are tied in view of Nagraj verdict and Delhi HC order verdict which had quashed the 1997 office memorandum.
“The government has to follow the Nagraj verdict. Since there is no stay on operation of Delhi HC order which had quashed the policy, the HC order would be in force and the government cannot move to implement the reservation policy,” advocate Parimal said.
But, the Centre and state governments see the apex court’s order as a big victory and appear all set to go whole hog in implementing quota in promotion.
Source:-The Times of India

Reservation in Promotion : Supreme Court Judgement in Civil Appeal No. 1226 of 2020…