Iconic General Post Office to finally get a makeover 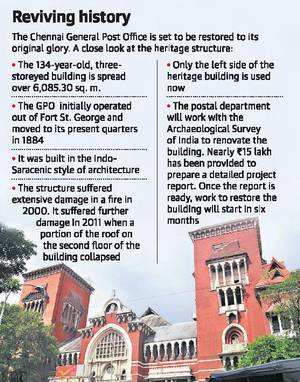 Department of Posts to work with ASI on restoration of heritage building
The iconic Chennai General Post Office is finally set for a makeover. Several years after it suffered extensive damage, the Department of Posts will soon call for a consultant to prepare a detailed project report to restore the 134-year-old heritage structure.
The department has sought the support of the Archaeological Survey of India in restoring the structure to its original glory. Spread over 6,085.30 sq. metres, the three-storeyed building witnessed a fire and roof collapse in 2000 and another roof collapse in 2011. Right now, postal department officials said, only the left side of the building is being used.
A team comprising officials from the Postal Department and ASI inspected the damaged portion last year. Alok Ojha, former Chief Postmaster, Chennai GPO, who is coordinating the project, said that detailed project report would be the first step towards restoration. ASI will provide an estimate once the report comes in.
Officials of the postal department said nearly ₹15 lakh has been sanctioned for the DPR.
Besides the restoration of the GPO, the department is also gearing up to construct new post office buildings in the city. Of the 568 post offices in the Chennai City Region, nearly 460 operate from rented premises.
R.Anand, Postmaster General, Chennai City Region, said that this year, two post offices in Kilpauk and Mandaveli would have their own buildings.
“At present, Kilpauk post office is functioning out of Taylors Road quarters. We will get funds allotted on a priority basis and new buildings will be constructed in vacant sites,” he said.
Energy efficiency
More post offices would become disabled-friendly and energy-efficient this year. The department has chosen five post offices — T. Nagar, Arani, Avadi camp, Ranipet and Tindivanam — to be provided with disabled-friendly features, including exclusive toilet blocks and ramps. Nearly ₹3 lakh has been allotted for incorporating such features in each post office.
“We are also providing solar panels and LED lights in post offices such as Anna Nagar and Bahour, Puducherry,” he added. 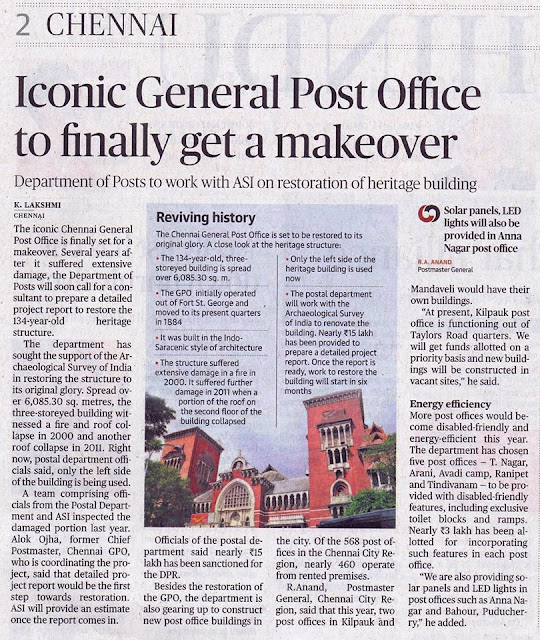