Change the Policy or We Shall Change the Government – M. Krishnan 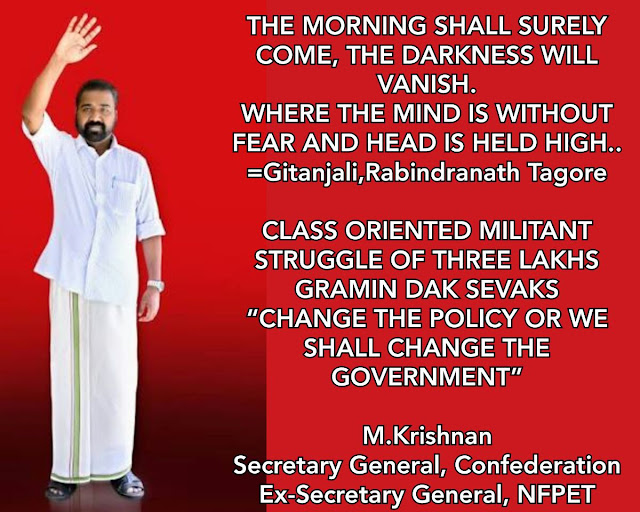 “THE MORNING SHALL SURELY COME, THE DARKNESS WILL VANISH.
WHERE THE MIND IS WITHOUT FEAR AND HEAD IS HELD HIGH ……
=Gitanjali,Rabindranath Tagore
CLASS ORIENTED MILITANT STRUGGLE OF THREE LAKHS GRAMIN DAK SEVAKS
“CHANGE THE POLICY OR WE SHALL CHANGE THE GOVERNMENT”
M.Krishnan
Secretary General, Confederation
Ex-Secretary General, NFPE
The unprecedented strike of three lakhs Gramin Dak Sevaks of Postal department will enter the 14th day on Monday. Functioning of rural postal services has come to a grinding halt. Out of 1,55,000 Post offices, 1,29,500 rural Post offices are completely shut down. GDS are not demanding to give them the “Moon” from the sky. They are demanding their legitimate wage revision. If 32 lakhs departmental employees wage revision can be implemented within eight months after submission of Seventh CPC report, why the unjustified delay of eighteen months for implementation of wage revision of only three lakhs low-paid GDS employees? Why lamenting about the deficit of the department only when GDS wage revision comes? Are GDS responsible for the deficit? No, not at all.
Postal “Gods” and Central Government are in deep slumber for eighteen months, when poor GDs are waiting..waiting..and waiting. The strike is a natural outburst of pentup discontentment and anger of the marginalized section after desperately waiting for long. Then suddenly the sleeping ‘Gods’ wokeup. Appeal after appeal started pouring in all languages just like distributing chocolates to lure children. But 96% of GDS stood united and continued their struggle. They declared they will not surrender their self-respect and prestige, evenif they and their families are made to starve or die by prolonging the strike.
They know, many had lost their lives and many sacrificed before our country got freedom. Mahatmaji had told the Britishers “you can kill me, but you can not make me surrender”.
They know, many had lost their lives and many sacrificed before the most dreaded “apartheid” system is legally banned and abolished in South Africa. Nelson Mandela has taught them “never to give up or surrender”.
They know, many had lost their lives and many sacrificed before the “slave system” is legally abolished in United States. Martin Luther King had told them “I have a dream” and his dream had come true later.
GDS system is a “beggar system”and nothing but slavery and bonded labour. This heroic struggle of GDS will definitely mark the beginning of the end of this slave system which is a “black mark in the face of Indian democracy”. Those GDS and departmental employees (though in some states only) who participated in this historic struggle for emancipation of the most down trodden section of the society will be remembered for ever in the history and their sacrifice will never go in vain.
Those Government’s supporters in the bureaucracy are propagating that GDS unions have committed a great mistake and unpardonable crime by going on an “untimely” indefinite strike, that too all the four Unions together. We have only to remind them the old saying “when a beggar come to your house, you need not give money to him if you don’t like, but please don’t unleash your dogs to bite him”. Let the GDS fight for their own destiny. Government may allow their right or not. This struggle is not the end of history. As long as injustice and discrimination are there, strikes and protests will emerge again and again likephoenix bird from the ashes.
Now the ball is in the court of the Government and Postal Department. It is they to decide how to play. What is wrong in inviting the GDS unions for negotiation and in reaching an honourable settlement, instead of distributing pamphlet type appeals one after another? What is the mindset of the top bureaucracy of the Postal Board? Are they thinking like olden days feudal landlords and expecting the GDS Union leaders “to obey them and not to question them”. Sorry, they are thoroughly mistaken and they should understand the writings on the wall. Only mutual trust and goodwill can build confidence in the mind of striking GDS and that can only lead to an amicable settlement.
We hope that good sense will prevail upon the powers-that-be. We want to make it clear that any attempt to break or crush the strike by attempting to victimization or any other coercive methods will only complicate the situation and the entire Central Government Employees will be forced to come out to defend and protect the striking GDS at any cost.