There is no need for clear cut orders from DG.the orders of para 9 read with its amendment is very specific . No one can deny
Counting of training period for those who are trained and recruited after 01.01.1986 for TBOP and BCR was already in force 11/1991. The extension of this factor to those who were trained and appointed before 01.01.1986 is the order now stands to envisage. The counting of trg period for TBOP BCR is a distinct matter and need not be taken for MACP. This is what clarification at point 2 asserts.
But the MACP which is in replacement of TBOP BCR is effective from 1.9.08 as per MACP order dtd 18.5.2009.
In para 9 of this order, there was an erroneous coining of sentence that made the pre appointment training ineligible for computing the qualifying service for MACP.
The pre appointment training was equated with ad-hoc and contract service by the conjunction ‘or’. This was absolutely a typographical error because the basic ACP Scheme 1997 for other department and our own TBOP BCR allowed the reckoning of pre appointment training for the financial upgradation as the case may be
This error was sought to be corrected by CHQ and the Amendment of removing the ‘or’ with the conjunction ‘on’ has been issued in the 23.6.2016.
Both the amendment OM with page 6 having para 9 of the original OM is posted above.
Our argument should therefore be focused on this rulings and nit with BCR TBOP related rules.
Except ad-hoc or contractual services before the regular appointment on pre appointment training all the period of training will be counted for MACP.
It is based upon this amendment the orders for MACPs are being issued in some circles
This CLFN pertains to TBOP BCR not for MACP
https://potools.blogspot.in/2018/05/counting-of-induction-training-period.html
For MACP we are relying the amendment 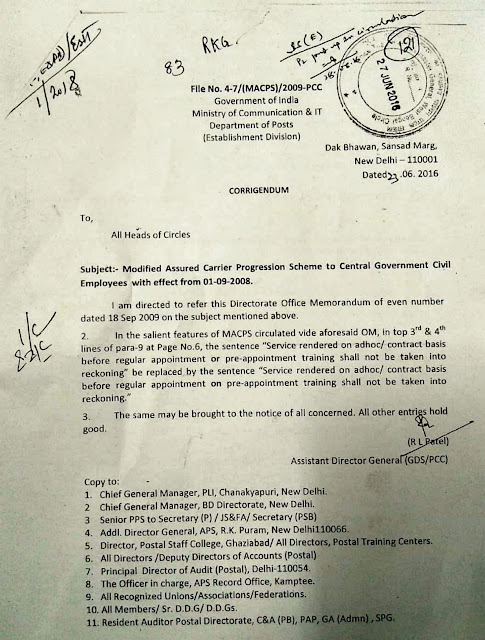 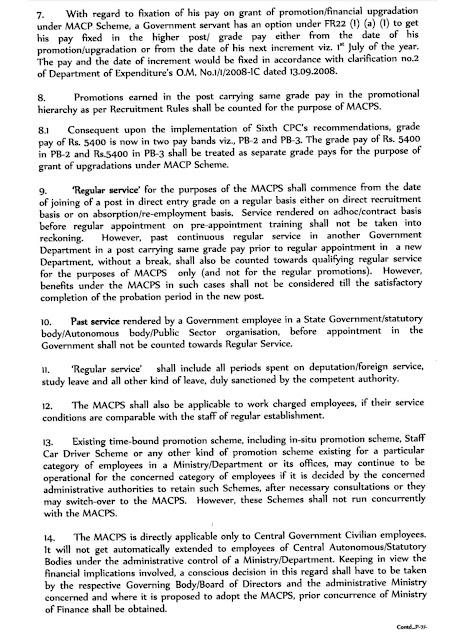