LTC – DoPT Clarification: Air fare for Children Below the age of 5 years of non-entitled Govt Servant is not admissible

LTC – DoPT Clarification: Air fare for Children Below the age of 5 years of non-entitled Govt Servant is not admissible
No. 31011/3/2016-Estt.A-IV
Government of India
Ministry of Personnel, Public Grievances & Pensions
Department of Personnel & Training
Establishment A-IV Desk
North Block New Delhi.
Dated May 15 , 2018
OFFICE MEMORANDUM
Subject: Admissibility of air fare for children below the age of 5 years of the Government servants non-entitled to travel by air on LTC – clarification reg.The undersigned is directed to invite reference to Department of Personnel Training’s O.M. No. 31011/2/2006-Estt.A dated 24.4.2006, 21.05.2007 and 03.12.2007 which stipulates that a non-entitled Goverment servant is allowed to travel by air while availing LTC provided that the reimbursement made in such cases is restricted to the train fare of entitled class. In this regard, it may be noted that while no fare is charged by Railways for a child below the age of 5 years travelling by train, airlines charge full air fare for child of 2 years of age and above.
2. This Department is in receipt of references from various Ministries/Departments seeking clarification on reimbursement of LTC claim in a situation where a child of a non-entitled Government servant, aged less than 5 years, travels by air on LTC and entitled train fare is claimed by that Government employee in respect of his/her child.
3. The matter has been examined and it is clarified that since children below the age of 5 years are not charged for rail journeys, no reimbursement shall be made in respect of the air journey performed by children, aged less than 5 years, of the Government servants who are not entitled to travel by air on LTC. It may be noted that this provision shall not be applicable for the segments where the air journey has been allowed to the non-entitled Government servants and their families under the special dispensation scheme, existent from time to time.
(Surya Narayan Jha)
Under Secretary to the Government of India 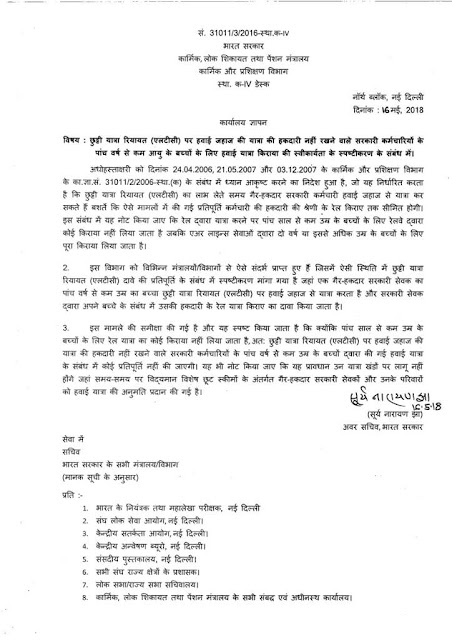 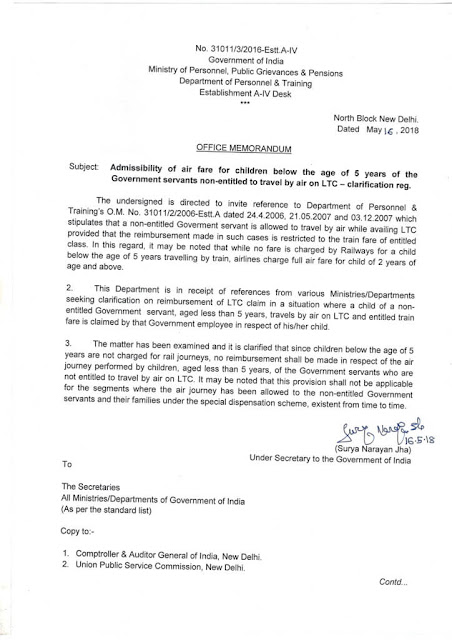 Circular No 6 dated 21.05.2018 regarding supply of books mentioned in Annexure -B for AAO examination

Clarification regarding queries being received in respect of Special cash package