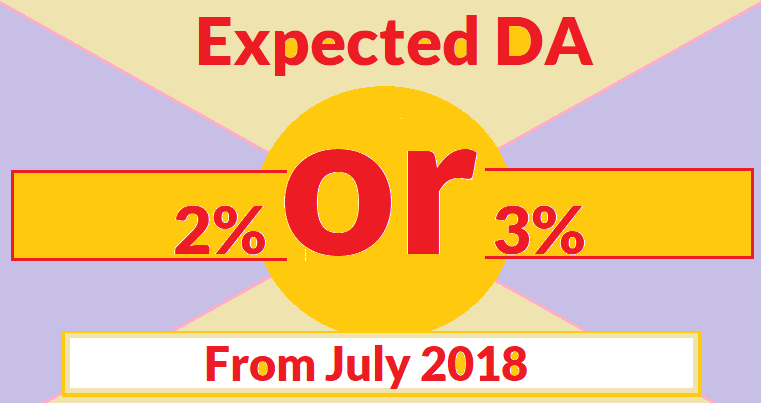 Central Government Employees including Railway Employees, Defense Personnel and all Central Services and Defense Pensioners are paid dearness allowance at the rate of 7% with effect from January 2018.
We have attempted to estimate expected DA from July 2018 in this article.
New DA Calculator for calculating Dearness Allowance payable on 7th CPC Basic Pay:

Taking in to account, the revised DA Calculation Formula we have now come up with a new 7th Pay Commission DA Calculator.

We need at least 2 point increase in consumer price index in all the three months from April 2018 to June 2018, to get 3% increase in DA with effect from July 2018
Considering the previous Trend in Consumer Price Index, Chances for Estimation 1 is higher than Estimation 2 as CPI should increase 2 points each in all the coming months in the case of later.
On the lower side, 1% increase in DA is possible only if 3 point decrease in consumer price index for the month from April 2018 and May 2018 followed by 4 point decrease in the month of June 2018. Decrease in CPI to such an extent is not possible considering the inflationary trend due rise in fuel prices.

Music and Dance competition for wards of Central Government Employees