Time-limit for submission of claims for Travelling Allowances

No.19030/1/2017-E.IV
Government of India
Ministry of Finance
Department of Expenditure
New Delhi, the 13th March, 2018
Office Memorandum
Sub: Time-limit for submission of claims for Travelling Allowances – regarding.
Consequent upon the issuance of General Financial Rule (GFR)-2017, vide Rule 290 of GFR-2017, time-limit for submission of claim for Travelling Allowance (TA) has been changed from one year to sixty days succeeding the date of completion of the journey. Accordingly, in supersession of this Department’s O.M. No.F.5(16)-E.IV(B)/67 dated 13.06.1967 & OM No.19038/1/75-E.IV (B) dated 18.02.1976, it has been decided with the approval of competent Authority that the claim of a Govt. servant to Travelling Allowance/Daily Allowance on Tour/Transfer/Training/Journey on Retirement, is forfeited or deemed to have been relinquished if the claim for it is not preferred within sixty days succeeding the date of completion of the journey.
2. ln respect of claim for Travelling Allowance for journey performed separately by the officer and members of his family, the dates should be reckoned separately for each journey and the claim shall be submitted within sixty days succeeding the date of completion of each individuai journey. Similarly, TA claims in r/o transportation of personal effects and conveyance shall be submitted within sixty days succeeding the date on which these are actually delivered to the Govt. servant at the new station.
3. The date of submission of the claims shall be determined as indicated below :-
4. In the case of claims falling under category 3(ii), which are presented to the Treasury after a period of sixty days succeeding the date of completion of journey, the date of submission of the claim
will be counted from the date when it was submitted by the Govt. servant to the Head of office/Controlling Officer within prescribed time-limit of sixty days.
5. A claim for Travelling Allowance of a Govt, servant which has been allowed to remain in abeyance for a period exceeding one year should be investigated by the Head of the Department concerned, lf the Head of Department is satisfied about the genuineness of the claim on the basis of the supportive documents and there are valid reasons for the delay in preferring the claims, the claims should be paid by the Drawing and Disbursing Officer or Accounts Officer, as the case may be, after usual checks.
6. These orders are not applicable in r/o Leave Travel Concession (LTC) claims which are governed by separate set of rules of DoPT.
7. These orders shall be effective from the date of issue of this O.M.
8. ln so far as the persons serving in the Indian Audit & Accounts Department are concerned, this order issues in consultation with the Comptroller & Auditor General of lndia.
sd/-
(Nirmala Dev)
Deputy Secretary to the Government of lndia
Authority: www.doe.gov.in 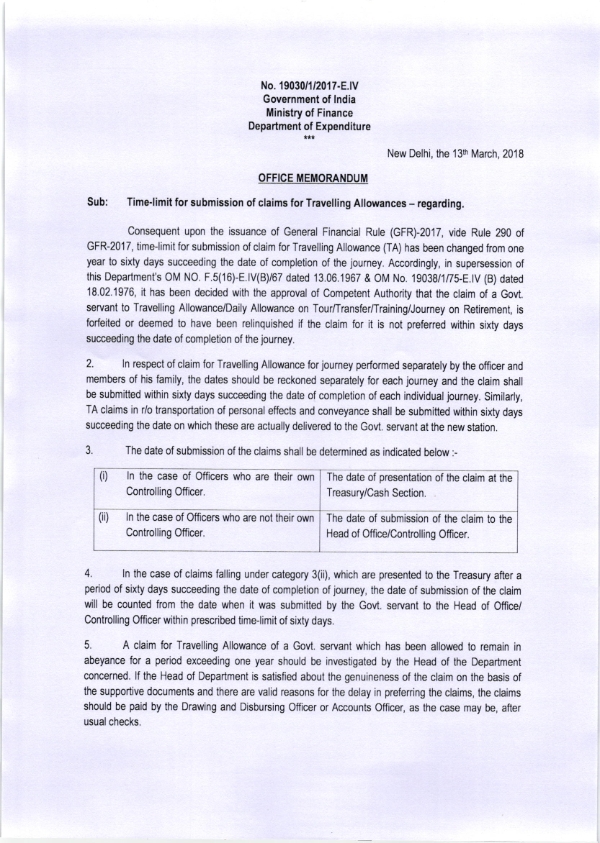 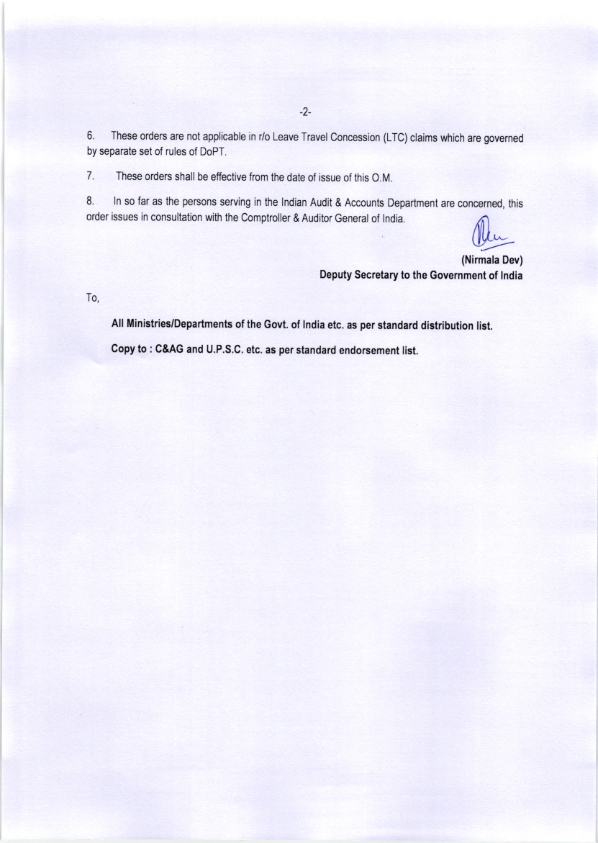 7th Pay Commission: From Protest Before Parliament To Salary Hike

TA Rules – Submission of Boarding Pass along with TA Bill

Closure of Departmental Canteens – Preventive measures to contain the spread of…

TA when deputed for training- rules