Pension is a right, not subsidy. How can you link Aadhaar to it, asks Supreme Court 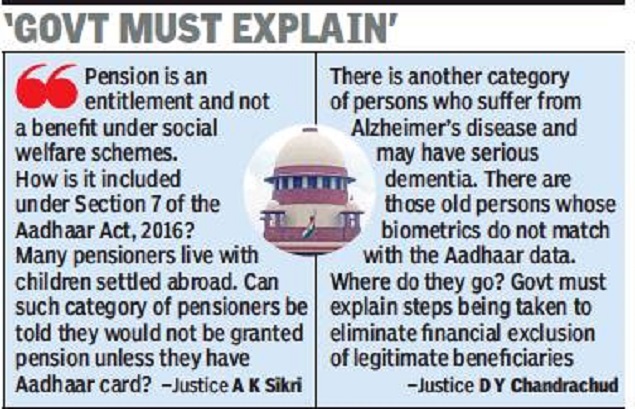 NEW DELHI: The Supreme Court questioned the Centre on Wednesday about its decision to link Aadhaar with pensions, reasoning that it is not a subsidy but an entitlement of a person for years of service he or she has rendered to the government in discharge of official duties.
Referring to the argument of petitioners that many pensioners have been denied their only subsistence in old age due to technical and physical reasons, a bench of Chief Justice Dipak Misra and Justices A K Sikri, A M Khanwilkar, D Y Chandrachud and Ashok Bhushan asked attorney general K K Venugopal whether the Centre was going to deny pension, a rightful entitlement, just for want of Aadhaar. Venugopal said Aadhaar has been instrumental in eliminating many bogus pensioners drawing post-retirement benefits for years.
Justice Sikri said: “Pension is an entitlement and not a benefit under the social welfare schemes. How is it included under Section 7 of the Aadhaar Act, 2016? Pension is a return for services rendered. There are many pensioners who live with their children who are settled abroad. Can such category of pensioners be told that they would not be granted pension unless they have an Aadhaar card?” Justice Chandrachud said, “There is another category of persons who suffer from Alzheimer’s disease and may have serious dementia. There are those old persons whose biometrics do not match with the Aadhaar data. Where do they go? Pension is a rightful entitlement and not a bounty given by the state”.
He said there are many instances where biometrics of manual labourers do not match, where in remote areas authentication fails because of lack of electricity or network connectivity, should the beneficiary be denied financial benefits? “We will appreciate if the government can come and tell us upfront that there is a serious issue of financial exclusion. The cabinet secretariat had flagged this issue. The government must explain what steps are taken to eliminate financial exclusion of legitimate beneficiaries,” Chandrachud said.
AG Venugopal said Aadhaar has been instrumental in eliminating many bogus pensioners drawing the post-retirement benefits for years. He said there is provision in the Aadhaar law not to deny social welfare benefits to even blind leperosy patients, who cannot provide either an iris scan or finger prints for Aadhaar. The method of their enrolment is different, he added.
The AG also said pension has a subsidy component and that Aadhaar would authenticate the actual pensioner numbers. “We will know who are actual beneficiaries. If in future it is required to amend the Aadhaar law, we will do that. But, for this reason the whole project need not be condemned.”
Referring to series of questions posed by the bench, the AG said no such person or class of persons have come before the court alleging that they have been denied pension because of want of Aadhaar or their physical biometrics not matching with Aadhaar data. “Unless they come and make an issue, we will really be groping in dark to find a solution to a hypothetical problem,” he said.
Source : https://timesofindia.indiatimes.com/

Instructions for the purchase of laptops, notebooks and similar devices for eligible officers revised guideline