Minutes on the cadre restructuring meeting with staff side by DPS(HQ) on 19th March 2018 at conference hall, O/o Chief PMG Tamil Nadu 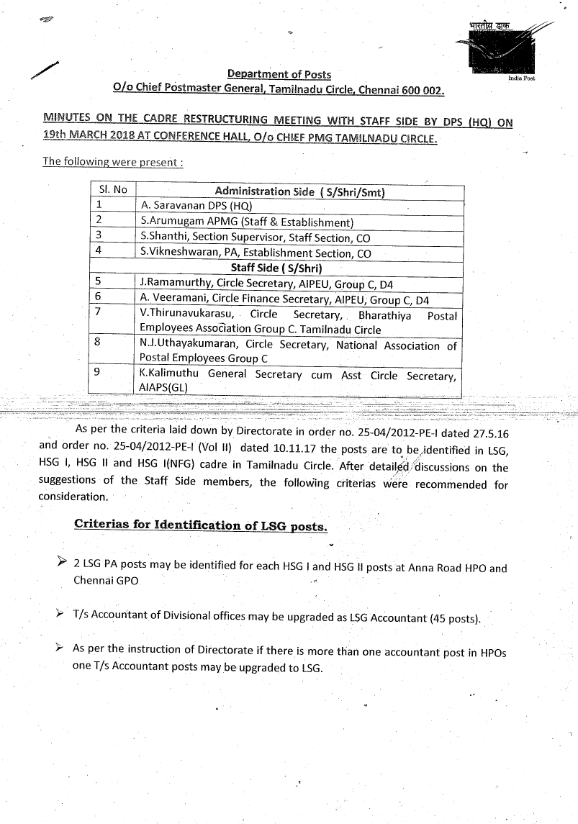 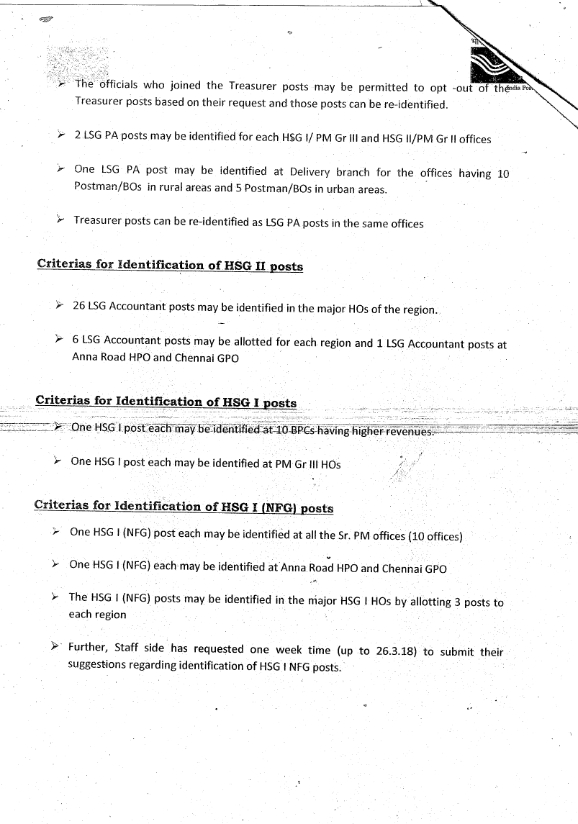 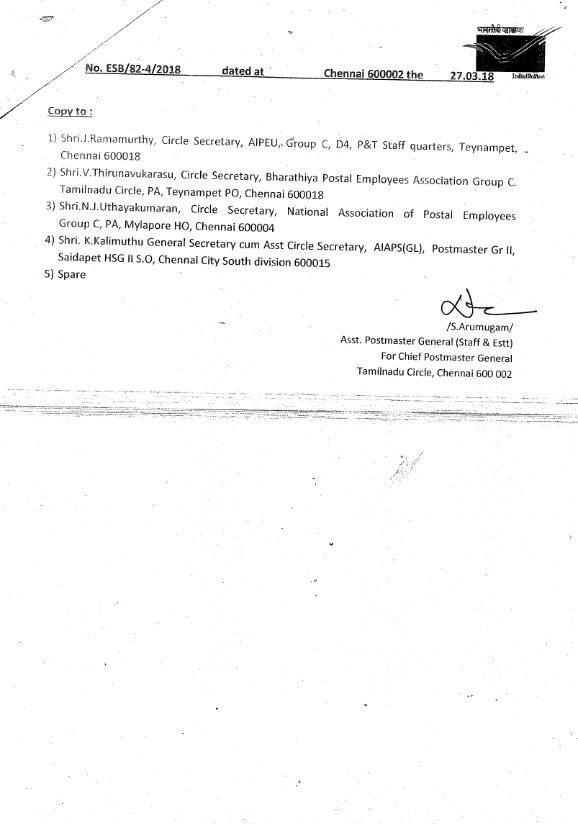 ALL   INDIA  POSTAL  EMPLOYEES   UNION  GROUP  ‘ C’,
TN CIRCLE ,  @ D4, DR.SUBBARAYAN NAGAR P&T QUARTERS,
TEYNAMPET,  CHENNAI 600 018
M. SELVAKRISHNAN                 J. RAMAMURTHY                    A. VEERAMANI
C IRCLE PRESIDENT              CIRCLE  SECRETARY           CIRCLE  FIN. SECRETARY
No. P3/Genl./Cadre restructuring                                                                         dt. 19.3.2018
To
The Chief Postmaster General,
Tamilnadu Circle,
Chennai  600 002.
Respected Sir,
Sub:  Cadre restructuring of Gr. C employees in Department of Posts (PA cadre) – Reg.
Ref :  1.DOP Memo. No. 25-4/2012-PE I(Pt) dt. 27.5.2016.
2. DOP Memo. No. 25-4/2012-PE I(Vol.II) dt. 10.11.2017.
3. Your office letter No. ESB/82-4/2018 dt. 14.3.2018.
…..
First of all, on behalf of our AIPEU Gr. C, TN Circle, we are thanking the CPMG, TN for convening a meeting with the Staff Side on cadre restructuring of P.A. cadre  , as requested by us in the RJCM meeting, to get the staff side views and grievances in order to mitigate the sufferings of the  staff in implementing the orders of the Directorate.
A Kind reference is invited to the memo.  cited under Ref (2) wherein the Committee has recommended many modifications on the original order.  Based on that, we put forth the following request/ views from our Union for consideration, before implementation or the said order.
Staff side views:-
1.     Request to stop issuing orders on RT 2018 in P.A. cadre till the implementation of II phase cadre restructuring in P.A. cadre, since most of the officials now completing their tenure in P.A. cadre would be promoted into LSG shortly and there would be two transfers within a short period, that too during the transition period of CSI roll outs. This was done in Kerala and Karnataka Circles .
2.     Circle Seniority list of P.A.s after 4.11.92 should be released, and all the representations of the officials on the draft seniority list should be considered and disposed properly before release of final seniority list and DPC procedures should be exhausted.
3.     The promotion orders should be released as a whole and not in piece meal and Promotions should be made from higher level posts to lower level posts, in order to fill up the promotional posts and for taking into account the chain of vacancies.
4.     Willingness may be called from among officials in filling up of promotional posts and the request of the seniors should be given due consideration, while filling up of such posts, as was done earlier.
5.     Initial promotional postings may kindly be made maximum within the same Dn/ Units.
6.     Many officials already working in Treasury under LSG (694) would be preferring to come out, since they have to be sent out by next year from Treasury posts, and there would be no place for them at that time, as per the orders of the Dte. Hence preference may be given to the earlier promoted officials, who are now working in Treasury, while deciding posting in LSG, within the same Division/Units, as per their request.
7.     One time consideration of the senior requests, who opted out/declined during last Cadre Restructuring LSG/HSG promotions  and they may be given another opportunity, since it is mentioned in the  orders of Dte. dt. 10.11.2017 that, for the sake of uniformity the promotion would be effective from the date of issue of the order viz. 27.5.2016. This instruction was issued, after modifying the original orders.
8.     Senior officials may be  given opportunity to decline their promotions on family and medical grounds and their requests may kindly be accepted, paving way to the younger aspirants for promotional posts, as was done earlier.
9.     Since it is mentioned in the order dt. 10.11.17 that LSG is not based on functional justification but on functional requirement and the posts should be equally distributed among the offices and Divisions, more no. of posts should be identified in City Divisions/Units offices like Anna Road HPO, Chennai GPO, Foreign Post, Chennai City Central Division, Chennai City South Division and Chennai City North Division, because there is no C Class or B Class offices exists in Unit offices and  minimal no. of  these offices exists other City Divisions. This will pave way to maintain the admitted pyramid structure in promotional hierarchy. Many no. of vacated Treasury posts from Rural Divisions may be diverted to City Units/Divisions, in order to maintain the even distribution of LSG posts in Divisions.
10.   Wherever there is no qualified hand for filling up of promotional posts such as HSG II/HSG I, the posts should be operated to the next level, till the officials getting required eligibility for promotion, in order to fill up maximum no .of promotional posts either on regular or on adhoc basis. This will pave way to fill up all vacancies in the shortage scenario. This was done in Odisha Circle.
11.   Chain of vacancies should be taken into account while notifying the vacancies for current year and further recruitments.
12.   NFG promotions should be given immediately to the senior officials on non functional basis, since it is pending for long without any reasons.
13.   While identifying  LSG posts in Accounts line, the request of the senior accounts line officials, who opted to General Line already,  may be considered as a onetime measure, since it is  the initialization  of CR in that line.
14.   All the pending Rule 38 transfer requests may kindly be considered before implementation of the order, since there would be no opportunity to consider these transfers in the coming years.
15.   Fresh Treasury Panel should be called among T/S P.A.s as per Treasury Norms, in order to fill up the vacated Treasury posts presently under LSG, along with the implementation of CR II phase, without giving any room for complaint.
16.   Suitable orders may kindly be issued for granting offg. Pay to those who are eligible and officiating in the higher posts from lower level.
Thanking you in anticipation Sir.
With regards,
(J. RAMAMURTHY)
CIRCLE SECRETARY.